North Korea Fires Missile Over Japan for First Time Since 2017

The missile launched Tuesday splashed down in the Western Pacific about 3,200 kilometers east of Japan, officials in Tokyo said. 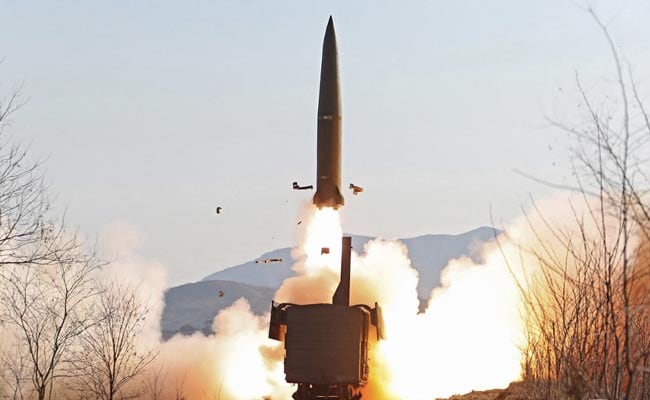 The test represented the longest-range weapon fired by North Korea since May.

North Korea fired a missile over Japan for the first time in five years, further ratcheting up tensions over Kim Jong Un's nuclear program and prompting a rare public safety warning to be issued by Tokyo.

The missile launched Tuesday splashed down in the Western Pacific about 3,200 kilometers east of Japan, officials in Tokyo said, adding there were no reports of damage. Japanese Prime Minister Fumio Kishida condemned the launch and South Korean President Yoon Suk Yeol warned of a "resolute response."

The test represented the longest-range weapon fired by North Korea since May and hearkens back to the autumn of 2017 when Kim's regime unleashed its largest barrage of long-range rockets and detonated a nuclear bomb. That prompted then-US President Donald Trump to threaten to "totally destroy" North Korea and led the United Nations to impose some of its toughest sanctions to punish Kim.

North Korea launched the intermediate-range ballistic missile at 7:23 a.m. from Jagang province, South Korea's Joint Chiefs of Staff said Tuesday, adding that the rocket passed over Japan. It flew about 4,500 kilometers (2,800 miles) and reached an altitude of 970 kms, the JCS said. That's more than twice as high as the International Space Station.

North Korea likely fired a Hwasong-12, Japanese Defense Minister Yasukazu Hamada said, referring to an intermediate-range missile with a range of about 4,500 kms. Joseph Dempsey, a weapons expert at the International Institute for Strategic Studies, said on Twitter that this was likely the missile's fifth successful test.

The 4th (below) test was in Jan 2022 after over four years absence pic.twitter.com/vWKiHXv8Au

Asian defense-related companies gained in Tuesday trading in Tokyo and Seoul after the launch.

There may be further provocations to come amid warnings from the US, Japan and South Korea that Kim's regime is preparing to test a nuclear bomb. Kim has ignored US President Joe Biden's calls to return to stalled disarmament talks and has fired off ballistic missiles in defiance of a United Nations ban.

The provocations will likely add to global anxiety over nuclear saber-rattling as Russian President Vladimir Putin alludes to his atomic arsenal while attempting to bolster his struggling invasion of Ukraine. The US's push to isolate Russia over the war -- coupled with increasing tensions between Washington and Beijing -- has allowed Kim to strengthen his nuclear deterrent without fear of new UN sanctions.

Russia or China vetoed a US-drafted sanctions resolution against North Korea at the UN Security Council in May and there's almost no chance of them supporting measures as they did in 2017. China fired its own ballistic missiles over Taiwan in August to protest US House Speaker Nancy Pelosi's visit to Taipei.

North Korea has not made any statements about the most recent tests in its official media, making it more difficult for the outside world to glean the intentions of the reclusive state. Kim has also been out of the public eye for more than three weeks.

The country's latest launches coincided with a visit to Japan and South Korea by US Vice President Kamala Harris in late September, as well as the arrival of the USS Ronald Reagan aircraft carrier group to South Korea for joint drills. These included an anti-submarine drill among the US, Japan, and South Korea.

North Korea has bristled for decades at joint military exercises, calling them a prelude to an invasion.

"Given the US-Japan-ROK joint naval drills that took place last week, Pyongyang cannot help but to give a nod to Tokyo by firing a missile towards Japan as a warning that it's not only the US and South Korea at target, but Japan, as well," said Soo Kim, a policy analyst with the Rand Corp. who previously worked at the Central Intelligence Agency.

South Korea's president said North Korea's nuclear and missile provocations would only further strengthen security cooperation in and outside the region, Yoon's office said in a statement. Seoul was also seeking "corresponding measures" to the launch, it said.

Kim Jong Un has fired off more ballistic missiles in 2022 than in any of his years in power. Pyongyang has been busy rolling out newer missile systems designed to use high speed and maneuverability to evade US-operated interceptors and carry a warhead to the US mainland, as well as to its bases in Asia.

Shortly after the latest launch, the Japanese government broadcast a notice to the public that a North Korean missile was heading toward the northern part of the country.

"A missile has been launched, a missile has been launched," were among some of the warnings read by broadcasters with television screens showing stark white text on a black background. It warned residents of less populated areas of some remote islands -- part of Tokyo as well as Hokkaido and Aomori prefectures -- to take shelter from a missile fired from North Korea.