Japan's Crown Prince Naruhito An Unlikely Critic Of The Monarchy 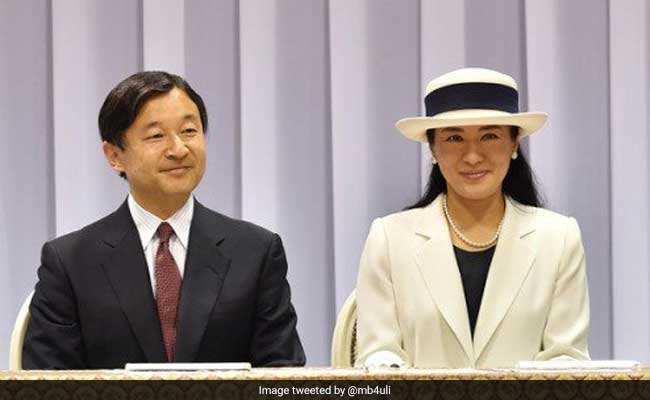 As the eldest of two brothers, PrinceNaruhito (left) will succeed his father on his death.

Tokyo: Japan's Crown Prince Naruhito may be heir to one of the world's oldest monarchies, but he is not shy about knocking the institution he represents or his country's warring past.

The 56-year-old has levelled subtle yet unprecedented criticism at the monarchy, blaming the rigid lifestyle imposed on royals for a decade of stress-related illness suffered by his wife, who was once a high-flying diplomat.

And, like his popular father Akihito, the heir apparent has warned that Japan must not downplay its early 20th-century militarism and actions in World War II remarks seen as a rebuke to the nationalist stance of Prime Minister Shinzo Abe.

The comments are unusual as Japan's royals are not supposed to wade into political matters under a post-WWII constitution imposed by occupying US forces, which stripped Akihito's father of his divine status.

As the eldest of two brothers, Naruhito will succeed his father on his death or if the 82-year-old monarch were to step down a prospect he hinted at in an historic address to the nation on today.

Naruhito briefly took over official duties in 2012 as his father recuperated from heart bypass surgery, and the prince has said the emperor should cut back because of his age.

Born on February 23, 1960, Naruhito was the first prince who grew up with his parents and siblings under the same roof it had been a custom for royal children to be raised by nannies and officials in charge of education.

The Crown Prince studied at the University of Oxford for two years in the 1980s after graduating with a history degree in Japan.

A poster of American actress Brooke Shields was splashed across the wall of his residence at Oxford, where he met with Britain's royals.

'PROTECT AT ANY COST'

Naruhito married Masako Owada, the daughter of a diplomatic family, in 1993, promising he would "protect her at any cost" as she entered the unfamiliar world.

But the imperial family lead a cloistered life inside their palace, encircled by stone walls and a large moat, and public appearances are highly choreographed.

In 2004, the palace disclosed Masako had been undergoing treatment for a stress-induced adjustment disorder for almost her entire marriage.

In response, Naruhito accused palace minders of stifling his wife's personality in unprecedented public remarks. He later apologised, but has called for "new royal duties" to fit the 21st Century.

The Crown Prince is active in water conservation efforts, presiding over a global meeting on the issue in 2003, but his wife's struggles have consumed the couple and leave open questions about what sort of emperor Naruhito might be.

"I think we're going to have to wait and see here," said Kenneth Ruoff, author of "The People's Emperor" and director of Japanese studies at Portland State University.

"He has adopted some causes, including clean water. But needless to say the whole crafting of the symbolic agenda of Naruhito and Masako has been circumscribed by her illness. So it's not as clearly set."

His own mother, Empress Michiko who was the first commoner to marry into Japan's monarchy had also suffered from stress-related problems.

Citing a Japanese folk tale, Michiko said she wished she had a straw cloak to become invisible so she could go to Tokyo's used-book shops and "once again take my time browsing," in an unusually candid remark.

The Crown Princess, who gave up her career to marry the prince, gave birth to their first and only child, a girl, in 2001.

The couple faced intense pressure to bear a son, in keeping with Japan's male-only royal succession, and there was talk of revising a late 19th century law that excludes women from the crown.

But political crisis was averted when a boy was born to the family of the crown prince's younger brother.
Comments
Prince NaruhitoJapan PrinceShinzo Abe