The whale arrived on Monday in the northern Japanese town of Kushiro, where hours earlier five ships had set out on the hunt. 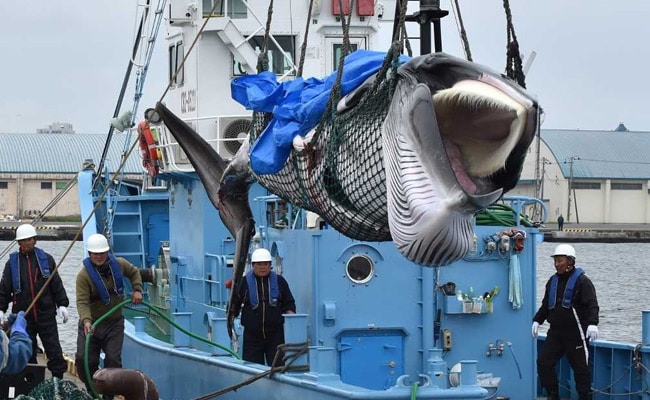 Meat from the whale, will be sold mostly at auctions in local markets later in the week.

It was a catch three decades in the making, and when the Japanese whalers brought ashore one of their first minke after the resumption of commercial hunting, the moment was marked with ceremony.

The whale arrived on Monday in the northern Japanese town of Kushiro, where hours earlier five ships had set out on the hunt.

"We were able to catch a good whale. It's going to be delicious."

The minke was among the first caught in a commercial hunt since Japan resumed the practice after withdrawing from the International Whaling Commission.

"It was worth waiting for 31 years," Kai said with a smile.

A strong smell emanted from the gaping mouth of the creature, which was hoisted inside a net from the boat to a truck.

Its stomach had been cut open at sea, mostly draining the blood from the whale, a technique to keep the meat fresh.

Still once on land, a pool of the blood oozed from the carcass and was swiftly washed away by the attentive workers.

The creature was hosed down, then whalers in blue outfits, white boots and helmets, lined up to pour ceremonial cups of the Japanese liquor sake over the animal.

The ritual is a tradition among Japanese fisherman, both celebrating and purifying the catch.

The resumption of whaling has been controversial outside Japan, drawing criticism from activists and anti-whaling countries, and whaling communities are sensitive to the optics of the hunt.

While reporters were allowed to see the animal brought ashore, they were ushered away before work began to break it down.

The whale, caught 42 kilometres southwest off Kushiro, was driven to a warehouse where a chain was attached to its tail so it could be dragged inside. Workers shouted at photographers to step back as they pulled.

"Move back! It would be bad if there's an accident," said one.

Meat from the whale, one of two minkes caught by boats from Kushiro on Monday, will be sold mostly at auctions in local markets later in the week, officials said.

"I myself want to eat (whale meat) as soon as possible," said Kai.

Conservationists have slammed Japan for withdrawing from the IWC and resuming the commercial hunts, which they view as inhumane and outdated.

But Japan contends the practice is a longstanding tradition that should not be subject to outside interference.

Asked about the criticism, Kai said whalers were "not doing anything wrong."

Japan's fisheries agencies has set a quota for commercial whale hunting through December of 227 whales -- 52 minke, 150 Bryde's and 25 sei whales.

"We have nothing to be ashamed of," said Kai.

(Except for the headline, this story has not been edited by NDTV staff and is published from a syndicated feed.)
Comments
WhaleJapanese Whalers