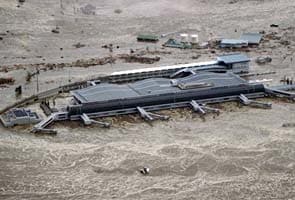 Sendai, Japan: Japan launched a massive military rescue operation Saturday after a giant, quake-fed tsunami killed hundreds of people and turned the northeastern coast into a swampy wasteland, while authorities braced for a possible meltdown at a nuclear reactor.

The official death toll stood at 413, while 784 people were missing and 1,128 injured. In addition, police said between 200 and 300 bodies were found along the coast in Sendai, the biggest city in the area near the quake's epicenter. An untold number of bodies were also believed to be buried in the rubble and debris. Rescue workers had yet to reach the hardest-hit areas.

Adding to the worries was the damage at the Fukushima Dai-ichi nuclear power plant, where two reactors had lost cooling ability. Because of the overheating, a meltdown was possible at one of the reactors, said Ryohei Shiomi, an official with Japan's nuclear safety commission.

But even if there was a meltdown, it wouldn't affect people outside a six-mile (10-kilometer) radius, he said. Most of the 51,000 residents living within the danger area had been evacuated, he said.

More than 215,000 people were living in 1,350 temporary shelters in five prefectures, or states, the national police agency said. Since the quake, more than 1 million households have not had water, mostly concentrated in northeast.

"Most of houses along the coastline were washed away, and fire broke out there," he said after inspecting the quake area in a helicopter. "I realized the extremely serious damage the tsunami caused."

The region continued to be jolted by tremors, even 24 hours later.

More than 125 aftershocks have occurred, many of them above magnitude 6.0, which even alone would be considered strong.

Technologically advanced Japan is well prepared for quakes and its buildings can withstand strong jolts, even a temblor like Friday's, which was the strongest the country has experienced since official records started in the late 1800s. What was beyond human control was the killer tsunami that followed.

It swept inland about six miles (10 kilometers) in some areas, swallowing boats, homes, cars, trees and even small airplanes.

"The tsunami was unbelievably fast," said Koichi Takairin, a 34-year-old truck driver who was inside his sturdy four-ton rig when the wave hit the port town of Sendai.

"Smaller cars were being swept around me," he said. All I could do was sit in my truck."

His rig ruined, he joined the steady flow of survivors who walked along the road away from the sea and back into the city on Saturday. Smoke from at least one large fire could be seen in the distance.

Smashed cars and small airplanes were jumbled up against buildings near the local airport, several miles (kilometers) from the shore. Felled trees and wooden debris lay everywhere as rescue workers coasted on boats through murky waters around flooded structures, nosing their way through a sea of debris.

Basic commodities were at a premium. Hundreds lined up outside of supermarkets, and gas stations were swamped with cars. The situation was similar in scores of other towns and cities along the 1,300-mile-long (2,100-kilometer-long) eastern coastline hit by the tsunami.

Also Saturday, operators at the Fukushima Daiichi plant's Unit 1 tried had to tamp down heat and pressure inside one of the reactors after the quake cut off electricity to the site and disabled emergency generators, knocking out the main cooling system. Authorities detected eight times the normal radiation levels outside the facility and 1,000 times normal inside Unit 1's control room.

The Tokyo Electric Power Co., which operates the six-reactor Daiichi site in northeastern Japan, said it had also lost cooling ability at a second reactor there and three units at its nearby Fukushima Daini site.

The government declared state of emergency at all those units.

Japan's nuclear safety agency said the situation was most dire at Fukushima Daiichi's Unit 1, where pressure had risen to twice what is consider the normal level. The International Atomic Energy Agency said in a statement that diesel generators that normally would have kept cooling systems running at Fukushima Daiichi had been disabled by tsunami flooding.

Japan gets about 30 percent of its electricity from nuclear power plants. Authorities warned citizens to be prepared for severe power cuts. More than 1 million households across Japan, mostly in the northeast, still didn't have access to water.

In Sendai, as in many areas of the northeast, cell phone service was down, making it difficult for people to communicate with loved ones.

"I'm waiting for my son to come here. But I cannot tell him he should come over here because mobile phones aren't working," a woman in her 70s told Japanese TV at a shelter in the town of Rikuzentakada, which appeared to be largely destroyed by the tsunami.

"My husband is missing," she said. "Tsunami water was rising to my knees, and I told him I would go first. He is not here yet."

On Friday, the entire Pacific was put on alert -- including coastal areas of South America, Canada and Alaska -- but waves were not as bad as expected.

President Barack Obama pledged U.S. assistance following what he called a potentially "catastrophic" disaster. He said one U.S. aircraft carrier was already in Japan and a second was on its way. A U.S. ship was also heading to the Marianas Islands to assist as needed, he said.

Most trains in Tokyo started running again Saturday after the city had been brought to a near standstill the day before. Tens of thousands of people had been stranded with the rail network down, jamming the streets with cars, buses and trucks trying to get out of the city.

The city set up 33 shelters in city hall, on university campuses and in government offices, but many spent Friday night at 24-hour cafes, hotels and offices.

Japan lies on the "Ring of Fire" -- an arc of earthquake and volcanic zones stretching around the Pacific where about 90 percent of the world's quakes occur, including the one that triggered the Dec. 26, 2004, Indian Ocean tsunami that killed an estimated 230,000 people in 12 countries. A magnitude-8.8 quake that shook central Chile in February 2010 also generated a tsunami and killed 524 people.