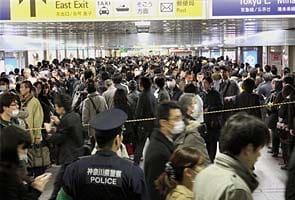 Tokyo: Radioactive iodine detected in the capital's water supply spurred a warning for infants on Wednesday and the government issued a stark new estimate about the costs of rebuilding from the earthquake and tsunami that slammed into the northeast of Japan this month.

Ei Yoshida, head of water purification for the Tokyo water department, said at a televised news conference that infants in Tokyo and surrounding areas should not drink tap water. He said iodine-131 had been detected in water samples at a level of 210 becquerels per liter, about a quart. The recommended limit for infants is 100 becquerels per liter. For adults, the recommended limit is 300 becquerels. (The measurement unit is named for Henri Becquerel, one of the discoverers of radioactivity.)

The announcement added to the growing anxiety about public safety posed by the Fukushima Daiichi Nuclear Power Station, which was severely damaged by the March 11 earthquake and tsunami, and it prompted a run on bottled water at stores in Tokyo. Prime Minister Naoto Kan said earlier Wednesday that the public should avoid additional farm produce from areas near the power station because of contamination, according to the Japanese news media.

The Health Ministry said in a statement that it was unlikely that there would be negative consequences to infants who did drink the water, but that it should be avoided if possible and not be used to make infant formula. The warning applied to the 23 wards of Tokyo, as well as the towns of Mitaka, Tama, Musashino, Machida and Inagi to the west of the city.

"It's unfortunate, but the radiation is clearly being carried on the air from the Fukushima plant," said Yukio Edano, the chief cabinet secretary. "Because it's raining, it's possible that a lot of places will be affected. Even if people consume the water a few times, there should be no long-term ill effects." There has been frequent rain in recent days and the watershed for Tokyo's tap water lies almost entirely to the north and northeast of the city; the nuclear plant is about 140 miles to the north.

But it was not entirely clear why the levels of iodine were so high, said a senior Western nuclear executive, noting that the prevailing breezes seem to be pushing radiation out to sea.

"The contamination levels are well beyond what you'd expect from what is in the public domain," said the executive, who insisted on anonymity and has broad contacts in Japan. "There is no way that stored fuel did not burn in a very significant way."

The Japanese daily Asahi Shimbun cited the Health Ministry as saying that drinking the water would hurt neither a pregnant woman nor her fetus, and that it was safe for bathing and other everyday activities.

But experts say that pregnant women, nursing mothers and fetuses, as well as children, face the greatest danger from radioactive iodine, which is taken in by the thryoid gland and can cause thyroid cancer. Children are at much higher risk than adults because they are growing, and their thyroid glands are more active and in need of iodine. In addition, the gland is smaller in children than in adults, so there is less tissue to share the radiation, and a given amount of iodine-131 will deliver a higher dose of radiation to the thyroid and potentially do more harm in a child.

According to the Centers for Disease Control, if an adult and a child ingest the same amount of radioactive iodine the thyroid dose to a newborn will be 16 times higher than to an adult; for children under 1 year, 8 times the adult dose; for a 5-year-old, 4 times the adult dose.

Pregnant women also take up more iodine-131 in the thyroid, especially during the first trimester. The iodine also crosses the placenta and reaches the fetus, and the fetal thyroid takes up more and more iodine as pregnancy progresses. During the first week after birth a baby's thyroid activity increases up to fourfold and stays at that level for a few days so newborns are especially vulnerable. Women who are breastfeeding will secrete about a quarter of the iodine they ingest into their milk.

The compound potassium iodide can protect the thyroid by saturating it with normal iodine so it will have no need to soak up the radioactive form. People in Japan have been advised to take it. Scientists say that if it is in short supply and must be rationed the pills should go first to pregnant women and children.

The accident at Chernobyl caused an epidemic of thyroid cancer -- 6,000 cases so far -- in people who were exposed as children. The risk in that group has not decreased over time, and many more cases are expected. The culprit was milk produced by cows that had grazed on grass that was heavily carpeted by fallout. The epidemic could probably have been prevented if people in the region had been told not to drink milk and if they had been given potassium iodide.

After the announcement Wednesday, at the Lawson's convenience store in the Tsukiji neighborhood of central Tokyo the shelves were about half-stocked with water. But a clerk said he had just restocked them an hour before.

"People came in and cleared us out in the first hour after the announcement," he said, saying he didn't want to be identified because he didn't want to anger his boss. "They were taking 20 or 30 bottles at a time."

Outside the store a man struggling to load more than 30 half-liter bottles onto his bicycle said he had bought the water for his wife, who is seven months' pregnant.

"We're going to stay in Tokyo for now," Mr. Takahashi, 31, said, "unless the reactor problem gets worse."

Around the corner at the AM/PM convenience store the bottled water section of the shelves was bare but for nine half-liter bottles of sparkling lemon-flavored water.

With water disappearing from the shelves the Tokyo city government acted to calm fears, saying it would begin distributing 240,000 bottles of water Thursday to families with children younger than 1 year, the broadcaster NHK reported. There are about 80,000 such children in the affected zone, NHK said.

Outside Tokyo the government said it had found radioactive materials at levels exceeding legal limits in 11 vegetables in Fukushima Prefecture, the Kyodo news agency reported. Shipments of the affected vegetables from there ended on Monday.

The United States Food and Drug Administration said on Tuesday that it would prohibit imports of dairy goods and produce from the affected region. Hong Kong also banned food and milk imports from the area.

The spread of at least a small amount of radiation is inevitable, considering the steam that is generated as emergency workers spray water on damaged reactors and cooling pools at the Fukushima complex. Government and power company officials were nonetheless expressing growing optimism that the crisis was closer to being brought under control.

But in a new problem at the plant the cooling system for the No. 5 reactor stopped working Wednesday afternoon, said Hiro Hasegawa, a spokesman for the Tokyo Electric Power Company, which operates the plant.

"When we switched from the temporary pump, it automatically switched off," he said. "We'll try again with a new pump in the morning."

Of the six reactors at the Fukushima Daiichi facility only the No. 5 and No. 6 units were considered to be under control. They, along with No. 4, were offline before the quake and while they have pools of spent fuel rods, like the other reactors, they have been of less concern.

All of the facilities have electrical power, a crucial step toward getting cooling systems restarted.

Officials said earlier Wednesday that they hoped to have the cooling pumps at the No. 3 and No. 4 units operating by as early as Thursday. They had been planning to test Reactor No. 3's cooling system later Wednesday. That reactor is considered one of the most dangerous because of its fuel -- mixed oxides, or mox, which contains a mixture of uranium and plutonium and can produce a more dangerous radioactive plume if scattered by fire or explosions.

But the effort was set back when the No. 3 facility began belching black smoke late in the afternoon, leading Tokyo Electric to evacuate workers from the area. No flames were visible and the cause of the smoke was unknown, the company said. Later it said the smoke had stopped after about an hour.

Water also was sprayed on the No. 1 and No. 2 units on Wednesday.

Rebuilding after the 9.0-magnitude quake and tsunami, which ravaged the northeastern coast of the main Japanese island of Honshu, will cost up to $309 billion, Mr. Kan's office said Wednesday. The World Bank, citing private estimates, said on Monday that the figure could reach $250 billion.

The economic cost of the disaster has hit Tokyo Electric, which is in negotiations with its bankers for loans of as much as about $24 billion, according to a person with direct knowledge of the situation who asked not to be identified.

Japan's three megabanks -- Sumitomo Mitsui, Tokyo Mitsubishi UFJ and Mizuho -- and a number of second-tier banks were discussing the company's needs, according to the person. There has been no talk of government guarantees for any such loans, said the person, who was not authorized to discuss the issue.

The Associated Press reported on Wednesday that the official death toll from the disaster had been raised to more than 9,500 with more than 16,000 people missing, although officials said there could be overlap between the figures.

Meanwhile, strong earthquakes hit the northeast coast on Wednesday. A 6.0-magnitude quake shook Fukushima Prefecture in the morning, according to the Japanese Meteorological Agency. That was followed by a 5.8-magnitude tremor about 20 minutes later.

Promoted
Listen to the latest songs, only on JioSaavn.com
Scientists have warned of aftershocks from the March 11 quake continuing for weeks, possibly months.