The five-year-old has been in critical condition since the cabin plunged to the ground on the Mottarone mountain, killing the other 14 people inside, including his parents, younger brother and great-grandparents. 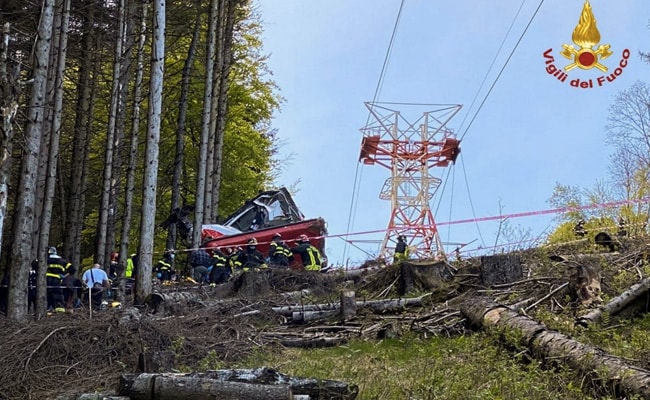 The boy who survived last weekend's deadly cable car crash in the Italian mountains is awake and will soon be moved out of intensive care, the hospital said Thursday.

The five-year-old has been in critical condition since the cabin plunged to the ground on the Mottarone mountain, killing the other 14 people inside, including his parents, younger brother and great-grandparents.

"Eitan is now awake and conscious in the intensive care unit, speaking with his aunt and looking around," said a spokesman for Turin's Regina Margherita hospital.

"From a clinical point of view, he is still in a critical condition due to his thoracic and abdominal trauma and the fractures to his limbs.

"In the next few days he will be taken out of intensive care and transferred to a hospital ward."

They are accused of deliberately deactivating the emergency brake that should have prevented the cable car from falling backwards when the cable snapped.

Eitan's school friends sent him an art project covered with colourful handprints and designs, to help cheer him up.

"It's an enormous tragedy," artist Stefano Bressani, father of one of his schoolmates, told Il Messaggero newspaper.

Marcella Severino, the mayor of the town of Stresa where the cable car started out, told the paper the boy's aunt -- his father's sister -- was looking after him.

"She has great strength, which will serve her well by her nephew's side. She's a constant presence in the life of the child, he's in good hands," she said.

Updating parliament on the incident earlier Thursday, Transport Minister Enrico Giovannini outlined how the cable car hit a support pillar before plunging to the ground.

Thirteen passengers died on the spot, while Eitan and another child were taken to hospital. The other child later died.

They disabled the emergency braking system "to avoid the continuous blocking of the system caused by the repeated operation -- apparently unjustified -- of the braking device, which had been showing anomalies for about a month", he told lawmakers.