It all comes down to you, it is out of my hands now: Barack Obama 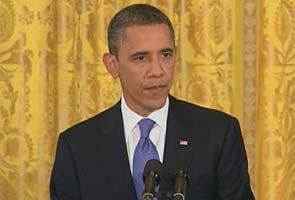 Des Moines, Iowa: Barack Obama and Mitt Romney made their final cases to Americans on election eve on Monday, capping a gruelling, negative, multi-billion dollar campaign and handing their fates to voters.

"It all comes down to you, it is out of my hands now, it is in yours," a hoarse, moist-eyed Obama told a 20,000-strong crowd in Iowa, concluding his re-election bid in the state that nurtured his White House dream from 2007.

Romney put an exclamation mark on his campaign with his own, rowdy late night rally, in an indoor sports arena in New Hampshire.

"Tomorrow is a moment to look into the future and imagine what we can do, to put that past four years behind us and build a new future," Romney said.

"Walk with me. Tomorrow, we begin a new tomorrow."

The foes, drained by fatigue, had earlier charged through the swing states that will decide the race, taking final shots hours before polls open in an election that will decide whether Obama wins a second White House term.

"President Obama promised change, but he couldn't deliver it," Romney earlier told thousands of cheering supporters in the pivotal state of Ohio, who chanted "One More Day, One More Day!"

After his final rally, the Republican candidate was due to make several get-out-the vote stops in Ohio and Pennsylvania on election day.

Obama, barnstorming with rock legend Bruce Springsteen and rapper Jay-Z, pleaded with supporters in Madison, Wisconsin to stick with him in a final push to the finish, as polls showed him as a slight favorite on Tuesday.

"If you're willing to work with me again, and knock on some doors with me, make some phone calls for me, turn out for me, we'll win Wisconsin. We'll win this election. We'll finish what we started," he said.

Obama, who also visited Ohio on the final day, is hoping to defy historic precedents suggesting that presidents who preside over shaky economies and high unemployment fail to win re-election.

In what was, win or lose, his last campaign rally, Obama was wistful and striking many of the emotional chords that resonated through his campaign in 2008 but have been absent this time, following his crisis-strewn presidency.

"I came back to ask you to help us finish what we started because this is where our movement for change began, right here," Obama said.

"After all we've fought through together, we cannot give up on change now. We know what real change looks like."

After wrapping up in Iowa, Obama headed home to Chicago for election day.

Election eve polls cemented the impression that Obama has the slightest of leads but cannot take victory -- and the historical validation of re-election -- for granted.

Final national polls showed an effective tie, with either Romney or Obama favored by a single point in most surveys, reflecting the polarized politics of a deeply divided nation.

Obama, however, led by three points in national polls conducted by Pew Research and by the Washington Post and ABC News, suggesting that if either candidate could boast of 11th-hour momentum, it was the 44th US president.

His last line of defense in the industrial Midwest also seemed to be holding: Obama led the RealClearPolitics.com average of polls in crucial Ohio by 2.9 percent, and was up by 2.4 points and 4.2 points in Iowa and Wisconsin.

Should those polls be reflected in vote totals on Tuesday, Obama would become only the second Democrat, after Bill Clinton, to win a second four-year term since World War II.

Obama was also up by a narrow margin in swing states Virginia, New Hampshire, Colorado and Nevada, while Romney led by similarly thin margins in poll averages of Florida and North Carolina.

Romney's camp insists that the former Massachusetts governor will profit from an anti-Obama wave on Tuesday and contends the polls overstate the proportion of Democrats in the electorate.

Obama's team however, cheered by early vote data and the neighborhood-by-neighborhood political machine the president has assembled, insisted that they would be vindicated by the election.

"It's going to be a close election as we always said. This is the season for weird theories, but we're very, very confident of both those things."

Springsteen told an 18,000-strong crowd in Wisconsin that his life in music had been dedicated to charting the distance between the American dream and American reality.

"Our vote tomorrow is the one undeniable way we get to determine the distance in that equation," said The Boss, who was traveling with Obama aboard Air Force One.

Obama's campaign deployed former president Bill Clinton to Pennsylvania, ostensibly a safe Democratic state but one which has seen a late run by Romney -- evidence, according to Obama's team, of desperation.

"I'm for President Obama because ... he's got a much better plan for the future," said Clinton, who has overcome acrimony left over from Obama's 2008 primary defeat of his wife Hillary to embrace the president.
Comments
US Election