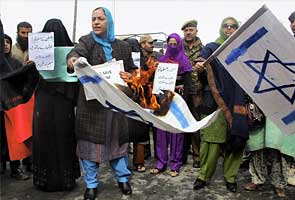 Jerusalem: Prime Minister Benjamin Netanyahu said on Sunday that Israel is ready to "significantly expand" its operation against militants in the Hamas-run Gaza Strip as it entered its fifth day.

"We are extracting a heavy price from Hamas and the terror organisations," Netanyahu said at the start of the weekly cabinet meeting. "The army is prepared to significantly expand the operation."

Netanyahu said he was holding ongoing talks with world leaders, "and we appreciate their understanding of Israel's right to self defence."

"The operation in the Gaza Strip is continuing, and we are preparing to expand it," he said.

His remarks came as thousands of Israeli troops backed by armour massed along the border, fuelling fears that the Jewish state is poised to expand its relentless aerial bombing campaign into a ground operation.

Netanyahu praised the "swift and impressive" response of reservists, 16,000 of whom have already been called up for duty in emergency orders.

"The soldiers are ready for any activity that could take place," he said at the cabinet meeting.

The Israeli army sealed off the main roads around Gaza late on Friday and shortly afterwards, the cabinet authorised the recruitment of up to 75,000 reservists, prompting a flurry of diplomatic efforts to broker a truce to head off any escalation.
Comments
IsraelGaza