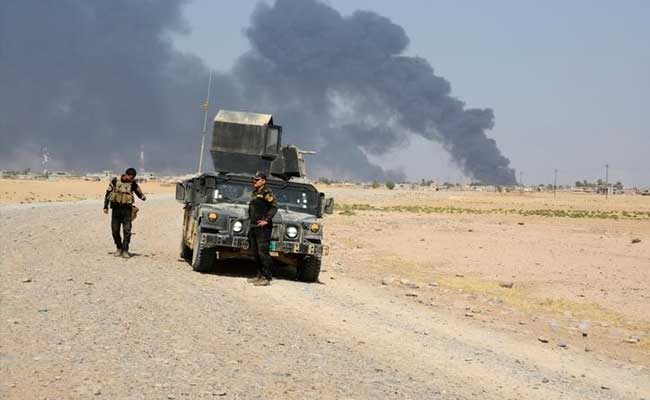 According US, shells lobbed at Qayyarah Airfield West have tested positive for a mustard agent. (Reuters)

Islamic State militants are suspected of firing a shell loaded with a chemical agent during an attack on U.S. and Iraqi troops in northern Iraq Tuesday, a Pentagon spokesman said.

If confirmed, it would be the first recorded chemical attack on U.S. troops since the Islamic State overran parts of northern and western Iraq in 2014.

According to Navy Capt. Jeff Davis, only one of the shells lobbed at Qayyarah Airfield West, where U.S. troops are based, tested positive for a mustard agent. There were no U.S. casualties, Davis said, and the shell, "likely a rocket or mortar, was imprecise and crude."

"This attack has not impacted our mission in any way, nor have we changed our security posture in the area around Qayyarah," Davis said.

In the past, when investigating chemical weapon attacks, U.S. forces have conducted a preliminary investigation of the weapon in the field before sending it for extensive lab testing and analysis.

Qayyarah Airfield West, also known as Key West, was retaken by Iraqi security forces in July and has been slowly converted into a staging point for the upcoming campaign to seize the city of Mosul, one of the Islamic State's last stronghold in Iraq.

The sprawling base once housed thousands of troops and numerous aircraft during the Iraq War, but after it was captured by the Islamic State in 2014 it was systematically mined and its facilities destroyed. According to defense officials, the degraded state of the base has made it difficult to turn it into an effective staging area for the approaching Mosul battle.

The Islamic State has used chemical weapons, in the past, most notably against Kurdish peshmerga positions in northern Iraq. The weapons, a mixture of mustard and chlorine agents, crudely loaded into a variety of artillery, mortar shells and rockets, have not been widely used.

The U.S.-led coalition -- in an attempt to stymie the group's ability to make the weapons -- has targeted individuals associated with overseeing their production and facilities where chemical ordnance is manufactured.

Earlier this month U.S. and coalition aircraft targeted a converted pharmaceutical factory in northern Iraq thought to have been a chemical weapons production facility. Twelve aircraft raked more than 40 targets spread across the facility, said Air Force Lt. Gen. Jeffrey Harrigian in a briefing with reporters shortly after the strike.