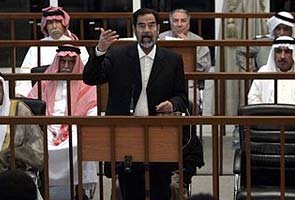 Baghdad: The Iraqi government said Wednesday it will disband the tribunal that condemned Saddam Hussein and other top regime officials to death and was heavily criticized by human rights groups.

The announcement could help alleviate tension between the Shiite-led government and Iraq's Sunni community, which has long felt unfairly targeted by the Iraqi High Criminal Tribunal and has demanded its closure in the interests of national reconciliation.

The statement only said that the Cabinet approved a draft law to disband the court and that it has been sent to parliament, without giving any further details.

The court spokesman, Raid Juhi, told The Associated Press that the decision was made because the court had finished its cases. The proposed law sets June 30 as a deadline to settle a few final minor cases, he added.

A number of international human rights organizations and Iraqi Sunni politicians have been questioning whether the proceedings of the tribunal, which tried and sentenced dozens of former officials, complied with international standards for fairness.

The first among the cases it handled was against Saddam who was hanged in late 2006 for his role in the deaths of more than 140 Shiite Muslims following an 1982 attempt on his life.

It also tried and sent to the gallows Hussein's cousin Ali Hassan al-Majid who gained his nickname "Chemical Ali" for ordering the use of mustard gas and nerve agents against the Kurds in response to their collaboration with the Iranians during the 1980-1988 Iran-Iraq War.

The court also tried and convicted 74-year-old Tariq Aziz, the only Christian in Saddam's inner circle, for his role in the crackdown on the Shiite political parties now dominating Iraq's politics. Aziz faces a death sentence for his conviction in that case but it has yet to be implemented.

Two other Saddam-era officials have also been convicted and sentenced to death. But the cases of Sultan Hashim Ahmad al-Tai, the former defense minister who led the Iraqi delegation at the cease-fire talks that ended the 1991 Gulf War, and Hussein Rashid
Mohammed, a former deputy director of operations for the Iraqi armed forces, have angered Iraq's Sunni population who believe the sentences are too harsh.

At a press conference, al-Moussawi played video of the three men confessing to the slaying of a local journalist from a Shiite TV station last month with pistols fitted with silencers.

The three will be sent to court to stand trial, he said.

Promoted
Listen to the latest songs, only on JioSaavn.com
Violence has dropped significantly in Iraq since 2008, but attacks still occur, particularly in Baghdad, where al-Qaida militants appear determined to show they are not a spent force. In recent weeks, there has also been an uptick in targeted assassinations carried out mostly against government and military figures.