Iraqi government forces retook eastern Mosul in January and began a push on May 27 to capture the remaining ISIS-held enclave in the western side of the city, where about 200,000 people are trapped in harrowing conditions. 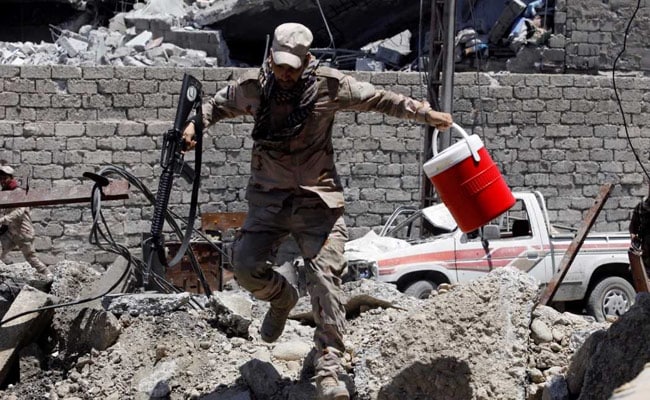 An Iraqi soldier as he runs across a street to avoid snipers from ISIS terrorists in Mosul.

Geneva: Children trying to flee western Mosul have been shot dead by ISIS terrorists, the U.N. human rights office said on Thursday, saying it had reports of a "significant escalation" in civilians deaths in the battle for the Iraqi city.

It also said it was investigating reports that 50-80 people had died in an air strike on the Zanjili district of Mosul on May 31. It did not say who carried out the strike.

The killing of fleeing civilians by ISIS terrorists occurred in the al-Shifa neighbourhood on May 26, June 1 and June 3, it said.

"Credible reports indicate that more than 231 civilians attempting to flee western Mosul have been killed since 26 May, including at least 204 over three days last week alone," the U.N. human rights office said in a statement.

"Shooting children as they try to run to safety with their families - there are no words of condemnation strong enough for such despicable acts," the statement quoted U.N. High Commissioner for Human Rights Zeid Ra'ad Al Hussein as saying.

Iraqi government forces retook eastern Mosul in January and began a push on May 27 to capture the remaining ISIS-held enclave in the western side of the city, where about 200,000 people are trapped in harrowing conditions.

Last week Iraqi police said at least seven civilians had been killed by ISIS mortar shells in the Zanjili area of western Mosul.

But a young man told Reuters he had been wounded when an air strike hit a group of 200-250 civilians collecting water because an ISIS fighter was hiding among them.

The U.N. statement said the deaths in Zanjili were reportedly caused by one of several recent air strikes that had inflicted civilian casualties and it was seeking further information about those attacks, without elaborating.

"The murder of civilians, as well as the intentional directing of an attack against civilians who are not directly taking part in hostilities, are war crimes," it said.