Iran Attack: Iran launched 22 missiles at Iraqi bases housing US and other coalition troops early Wednesday in response to the killing of senior commander Qasem Soleimani 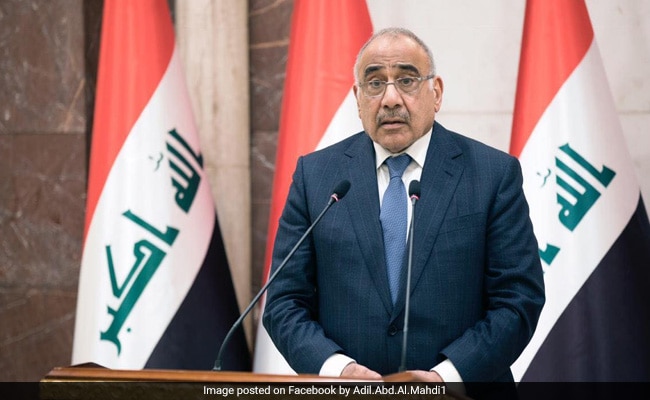 Iran Vs USA: Iran launched missiles at US-led forces in Iraq on Wednesday

Iran fired a volley of missiles on Wednesday at Iraqi bases housing US and other foreign troops, the Islamic republic's first act in its promised revenge for the US killing of a top Iranian general.

Launched for the first time by forces inside Iran instead of by proxy, the attack marked a new turn in the intensifying confrontation between Washington and Tehran and sent world oil prices soaring.

There was no immediate suggestion of any link to the missile strikes but a Ukrainian airliner crashed shortly after takeoff from Tehran early Wednesday with the loss of all 176 people on board.

The Pentagon said: "Iran launched more than a dozen ballistic missiles against US military and coalition forces in Iraq.

"It is clear that these missiles were launched from Iran and targeted at least two Iraqi military bases hosting US military and coalition personnel."

The missiles targeted the sprawling Ain al-Asad airbase in western Iraq and a base in Arbil, both housing American and other foreign troops deployed as part of a US-led coalition fighting the remants of the Islamic State group.

Iran's supreme leader, who has the final say in all matters of state, said it was a "slap in the face" for the United States but that revenge was yet to come.

The Pentagon said the facilities had been on "high alert" after days of steadily mounting tension.

The office of Iraq's premier said it had received "an official verbal message" from Iran informing it that a missile attack on US forces was imminent.

The statement by Adel Abdel Mahdi's spokesman said his office was simultaneously contacted by Washington as the missiles rained down.

"Iraq rejects any violation of its sovereignty and attacks on its territory," the statement said, without specifically condemning the missile strikes.

Iraq's military said it sustained no casualties in 22 missile strikes, most of them hitting Ain Al-Asad.

The Iraqi military said it sustained no casualties in 22 missile strikes on bases housing US troops.

France too said it sustained no casualties.

"We are concerned by reports of casualties and use of ballistic missiles."

The Norwegian military said coalition troops were warned of the attack in advance through intelligence channels.

'Slap in the face'

The Iranian Revolutionary Guards Corps said Ain al-Asad was hit with dozens of missiles in response to Friday's US drone strike in Baghdad that killed senior Iranian commander Qasem Soleimani.

It warned any US counter-attack would be met with an even "more crushing response" and threatening to strike Israel and America's "allied governments."

Iran's supreme leader Ayatollah Ali Khamenei said a "slap in the face" had been delivered to the US but hinted more could come.

"An important incident has happened. The question of revenge is another issue," Khamenei said in a speech broadcast live on state television.

"Military actions in this form are not sufficient for that issue.

"What is important is that America's corrupt presence must come to an end in this region."

Iran's Foreign Minister Mohammad Javad Zarif had seemed to indicate the missile strikes were over for now.

The Norwegian military said coalition troops were warned of the attack in advance through intelligence channels.

The attack emboldened Iran's allies in Iraq, who ramped up threats to avenge top Iraqi paramilitary commander Abu Mahdi al-Muhandis, who was killed with Soleimani.

Muhandis was the deputy head of Iraq's Hashed al-Shaabi, a military network incorporated into the Iraqi state whose factions are backed by Tehran.

Paramilitary chief Qais al-Khazali -- blacklisted as a "terrorist" by the US -- said Iraq was preparing its own response for Muhandis's death.

"That response will be no less than the size of the Iranian response. That is a promise," Khazali threatened.

The brazenness of the strike was highly unusual for Iran, which has tended to disguise attacks on US interests or troops through its use of proxy Shiite forces.

This time, conventional, rather than guerrilla-style weapons were used and responsibility was rapidly claimed.

"It is a major escalation. Ballistic missiles openly launched from Iran onto American targets is a new phase," said Phillip Smyth, an expert on Shiite militias.

Oil prices jumped on the news, with the benchmark WTI spiking more than 4.5 percent to $65.54 a barrel before receding slightly.

Separately, the Ukraine International Airlines Boeing 737 went down just outside Tehran after taking off bound for Kiev.

There was no immediate suggestion of any link with the Iranian strikes but carriers including Air France, Royal Dutch Airlines and Lufthansa announced they were suspending flying though Iranian and Iraqi airspace as a precaution.

The crash was likely to have been caused by "technical difficulties", Ali Khashani, spokesman for Imam Khomeini International Airport told Iran's Press TV.

The US's aviation regulator banned civil flights over Iraq, Iran and the Gulf, citing the potential for "misidentification" of aircraft.

The slide into open confrontation followed days of sabre rattling between Washington and Tehran, coupled with growing confusion over the future of US troops in Iraq, where many are outraged at the drone strike.

Hours before Iran struck, Trump tried to end confusion over his plans for the approximately US 5,200 troops in Iraq, saying they should stay despite calls by the Iraqi parliament for their expulsion.

"At some point we want to get out, but this isn't the right point," Trump told reporters at the White House.

Despite Washington's assurances, several allies started to leave, raising questions over the future of the US-led mission to help Iraqis fight terrorists.