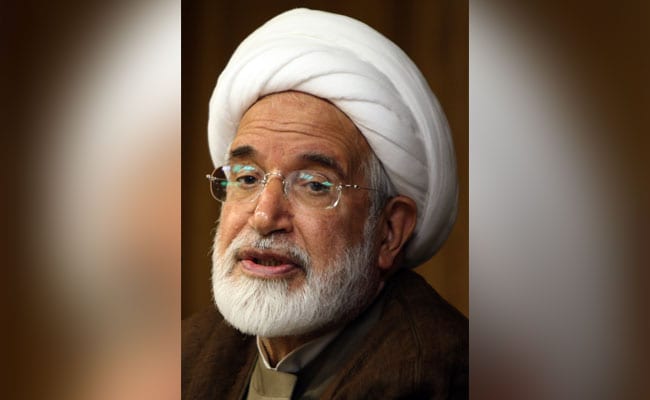 Tehran, Iran: Mehdi Karroubi, a leading member of the Iranian opposition who has been under house arrest for almost six years, announced he is quitting his party, Iranian media reported on Tuesday.

Karroubi and Mir Hossein Mousavi were reformist candidates during the 2009 presidential election, and questioned the shock victory of conservative Mahmoud Ahmadinejad which led to mass protests.

Two years later, both leaders ended up under house arrest for their part in the protests, which regime leaders still call "the sedition".

"Considering my situation since (2011) and given that I do not know how long this will last, I ask my friends to accept my resignation," Karroubi, 79, wrote in a letter to his party, according to reformist newspaper Shargh.

There have been repeated calls for Karroubi and Mousavi to be tried in court to no avail.

Hardliners claim house arrest was actually an "act of clemency" for the two leaders, since otherwise they would be put to death for sedition, in the words of ultra-conservative lawmaker Mojtaba Zolnour last week.

Sadegh Larijani, the head of the judiciary, which is considered close to hardliners, said Monday that the "sedition dossier is still open and will be examined," without giving further details.

Karroubi said his resignation was aimed at preserving the unity of his party, National Trust, ahead of the presidential election in May -- despite it being banned since his arrest.

"While keeping its independence, the party must cooperate with the other reformist groups and movements," he wrote.

President Hassan Rouhani, a moderate who allied with the reformists to win power in 2013, has failed to secure the release of Karroubi and Mousavi as he promised during his campaign.

Reformists and moderates have said they will maintain their alliance ahead of May's election, when Rouhani is expected to run for a second term.

Promoted
Listen to the latest songs, only on JioSaavn.com
The conservative camp have also sought to unite their disparate factions. A new group called the Popular Front of the Forces of the Islamic Revolution was announced on Sunday with a view to choosing a single candidate to run against Rouhani.