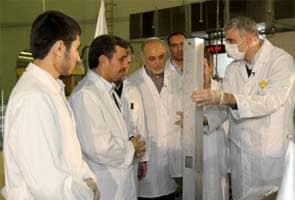 Washington: A string of aggressive gestures by Iran this week -- assassination attempts on Israelis living abroad that were attributed to Tehran, renewed posturing over its nuclear program and fresh threats of economic retaliation -- suggest that Iranian leaders are responding frantically, and with increasing unpredictability, to the tightening of sanctions by the West.

As investigators unearthed new evidence implicating Iran in the attacks this week in Thailand, India and Georgia, President Mahmoud Ahmadinejad of Iran announced Wednesday what he said was his country's latest nuclear advance, and Iran's Oil Ministry threatened to pre-empt a European oil embargo by cutting off sales to six countries there.

"These are all facets of the same message," said Muhammad Sahimi, an analyst and professor at the University of Southern California. "Iran is saying, 'If you hit us, we will hit back, and we are not going to sacrifice our nuclear program.' "

The flurry of Iranian actions and statements comes as Western governments are watching closely for signs of Iran's reaction to the tougher sanctions they have imposed. But the intentions of Iran's divided leadership are notoriously difficult to divine, and even as Mr. Ahmadinejad declared defiantly that "the era of bullying nations has passed," another Iranian official said Tehran was ready for new talks on the nuclear issue.

The European Union's foreign policy chief, Catherine Ashton, confirmed on Wednesday that she had received a reply from a top Iranian official responding to her invitation to negotiations over the future of its nuclear program. Iran's Al Alam television said the country had offered to "hold new talks over its nuclear program in a constructive way."

American officials reacted with caution to the reported offer to talk and said they saw little substance in either the oil threat or Mr. Ahmadinejad's announcement that Iran had new centrifuges able to enrich uranium more quickly. The Iranian president was shown on live television overseeing the loading of what was described as an Iranian-made fuel rod into a research reactor and declaring that "the arrogant powers cannot monopolize nuclear technology. They tried to prevent us by issuing sanctions and resolutions but failed."

"The Iranians have for many months been putting out calendars of accomplishments, and based on their own calendars, they are many, many months behind," Ms. Nuland said.

Nor did the threat to cut oil sales to six European countries -- first incorrectly announced by Iran's Press TV as already in effect -- have much of an impact. The White House spokesman, Jay Carney, noted that the European Union banned new oil contracts with Iran last month and said it would halt all imports of Iranian oil July 1. Oil prices ticked up by $1.06 a barrel to $101.80 on the New York Mercantile Exchange in response to Iran's warning.

"If there's a meta-narrative here, it's that Iran tends to speak loudly but carries a small stick," Mr. Sadjadpour said. "Their alleged terror attacks projected incompetence more than fear, their announced nuclear progress is likely exaggerated, and their threat to pre-emptively cease oil exports to Europe turned out to be another bluff."

Evidence was accumulating that the bombing this week that injured four people in New Delhi, including an Israeli diplomat's wife, and bombs discovered in Tbilisi, Georgia, and Bangkok were part of a single plot, for which Israel has blamed Iran. Iranian officials have denied any involvement.

Two Iranian suspects in the Bangkok episode -- in which an explosion rocked a house and led investigators to more bombs there -- were in custody in Thailand and a third in Malaysia, officials said. And Thailand's chief of police, Gen. Prewpan Dhamapong, said the explosive devices found in the rented house resembled those found in Georgia and New Delhi. He added that the Iranian suspects were on a mission targeting Israeli diplomats.

In Israel, Prime Minister Benjamin Netanyahu said the incidents showed why all nations should draw "red lines against Iranian aggression."

"These days, Iran's acts of terror are clear to everyone," Mr. Netanyahu told Parliament. The method of the bombing in New Delhi and attempted bombing in Georgia this week -- magnetic devices attached to cars -- appears to be the same as those used to kill Iranian nuclear scientists in attacks widely attributed to Israel.

The Iranian actions came at a tense time, after weeks of public discussion in Israel and the United States of the possibility of Israeli airstrikes to slow the progress of Iran's nuclear program, which Western officials believe is working toward a capacity to make nuclear bombs and which Iranians say is for peaceful purposes.

The latest developments suggested to some analysts that Iran's supreme leader, Ayatollah Ali Khamenei, was deliberately lashing out at the West, though it was not clear whether his intention was simply to retaliate or to provoke a limited war with Israel. Some Iranian hard-liners are said to believe that such a war would benefit them, allowing them to close ranks and assert greater authority for the elite Revolutionary Guards.

"I think this is Iran's way of saying, 'Look out, we can reach out and touch you,' " said Mehrzad Boroujerdi, a professor of Middle East Studies at Syracuse University. "But I doubt that Khamenei wants to go all the way to a serious armed confrontation."

Some analysts cautioned against taking the recent developments as signs of a new Iranian position, noting that Iran is now more fragmented politically than ever, and that the country's leaders often deliberately send divided messages. "If they are going to make a concession, they will do it behind the scenes," said Kelly Golnoush Niknejad, editor of the news site Tehran Bureau. "Often the Iranian government will say one thing in public and do something entirely different in diplomatic channels."

Yet most analysts doubt that Iran is ready to make a diplomatic overture that the West will take seriously. Although Mr. Ahmadinejad is widely said to be eager for a real breakthrough with the West on the nuclear issue, Iran's supreme leader holds final authority over foreign affairs, and he is extremely resistant to concessions.

While Iran appeared to be signaling a willingness to start more nuclear talks, in the letter from Saeed Jalili, the country's top nuclear negotiator, to Ms. Ashton, some diplomats and analysts were dismissive.

"Jalili has a history of making offers that stick to generalities and avoid any specific discussions," said Mr. Sahimi, the U.S.C. analyst.

The nuclear claims Iran made Wednesday seem either overstated or insignificant. It was unclear whether Iran had succeeded in producing real homemade fuel that could safely power a research reactor for long periods of time or whether the televised display involved prototype fuels or test materials. "I'm very skeptical," a European diplomat familiar with Iran's nuclear effort said of the reactor claim.

Iran's new centrifuge claims also seem exaggerated. Starting nearly six years ago, in April 2006, Tehran has regularly boasted that it is on the verge of perfecting and deploying a new generation of more advanced centrifuges that will enrich uranium far more quickly.

Promoted
Listen to the latest songs, only on JioSaavn.com
Mr. Ahmadinejad's nuclear announcement, in the view of some analysts, was an effort to create "facts on the ground" in advance of any new nuclear talks. In addition, it might be a play for domestic support in advance of Iran's upcoming parliamentary elections, scheduled for March 2, which could affect a power struggle between his supporters and Ayatollah Khamenei's.