The video was shot by a military drone, Iran's Tasnim news agency claimed on Sunday in a report on its website, and published some of the imagery from the surveillance flight. 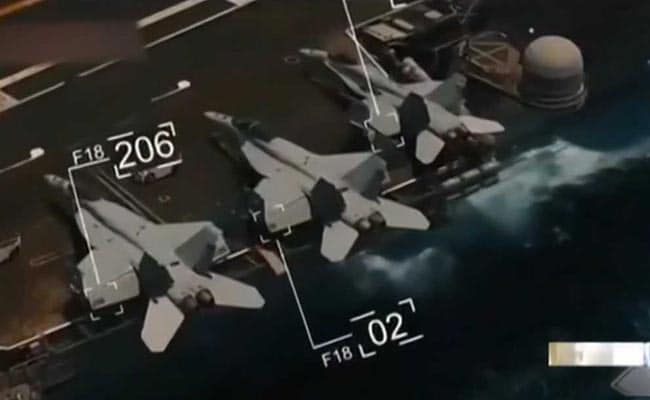 Footage of an American aircraft carrier in the Gulf which Iran claimed it shot with a drone in the Gulf appears to be "several years old", the US Navy has said.

The video was shot by a military drone, Iran's Tasnim news agency claimed on Sunday in a report on its website, and published some of the imagery from the surveillance flight.

"The footage the Iranians recently released... appears to be several years old, and of the last deployment to the Arabian Gulf by the USS Dwight D. Eisenhower (CVN 69)," Lt. Chloe Morgan, US Naval Forces Central Command spokesperson, told AFP in an email.

The video, which could not be independently verified, showed a light blue drone of the Iranian Revolutionary Guards taking off from a desert base near the sea, followed by imagery purportedly from its cameras of an escort ship and then an aircraft carrier with planes parked on the deck.

Tasnim did not identify the vessels or say when the drone footage was shot, but in the video, the number "69" is seen clearly on the aircraft carrier.

The report comes during nearly three weeks after Washington formally declared the Guards a "foreign terrorist organization" and added it to a blacklist.

The Guards are an ideological military force, operating in parallel to Iran's regular army.

Its naval arm is tasked with Gulf security, including the strategic Strait of Hormuz, a global shipping route routinely crossed by US forces.