From the outside, it looks like an ordinary commercial warehouse, only much bigger, about the size of two super Walmarts. Inside it's dark except when motion sensors are triggered. 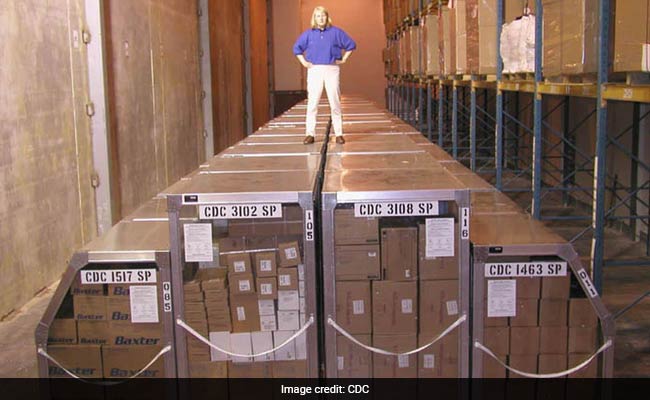 A Secret Location Outside Washington, D.C.: From the outside, it looks like an ordinary commercial warehouse, only much bigger, about the size of two super Walmarts. Inside it's dark except when motion sensors are triggered. When the lights come on, hundreds of thousands of shrink-wrapped boxes of medicines emerge from the gloom, stacked on shelves nearly five stories high.

This is quite a different kind of warehouse. It and several others across the country are part of the $7 billion Strategic National Stockpile, a government repository of drugs and supplies ready for deployment in a bioterrorism or nuclear attack, or against an infectious disease outbreak - of either a known pathogen or some unknown threat with pandemic potential, which global health officials dub "Disease X" - or other major public health emergency. There are antibiotics, including the powerful medication Ciprofloxacin, vaccines for smallpox and anthrax, and antivirals for a deadly influenza pandemic.

The need for biodefense has become more clear in the wake of outbreaks of Ebola in West Africa, Zika in the Americas, devastating wildfires and hurricanes, and the poisonings of the North Korean leader's half brother in Malaysia and former Russian spies in England with nerve and radiological agents. Last year, the federal government added three new chemicals to its list of high-priority threats, including chlorine and blister agents, such as mustard gas, that have been used in deadly chemical weapons attacks in Syria. On Monday, officials announced plans to add more anthrax antitoxin.


For nearly two decades, the repository has been almost exclusively managed by the Centers for Disease Control and Prevention. That will change under a Trump administration plan to shift oversight of the $575 million program to a different part of the Department of Health and Human Services. Doing so, proponents say, will keep the program intact but streamline decision-making and create "efficiencies."

But some public health officials and members of Congress in both parties worry the move will disrupt a complex process that relies on long-standing relationships between the federal program and the state and local agencies responsible for distributing the medicine. During a congressional hearing last week, lawmakers expressed concern that a change could risk the government's ability to deliver lifesaving medical supplies to what public health officials call "the last mile" - to people in need during a disaster.

"You have spent years planning and exercising and training because you need to know what to do if 100,000 doses of Cipro showed up in your state," said Ali Khan, who used to oversee the program and now is dean at the University of Nebraska Medical Center's College of Public Health. "How would you get it out? Who would dispense it? These parts are as critical as maintaining the medicines in pristine condition."

He and other public health experts also question whether the administration's plan will politicize decision-making about products bought for the stockpile. The office of the assistant secretary for preparedness and response (ASPR) oversees the process by which the government awards contracts to private biotechnology companies that develop and manufacture medicines such as anthrax vaccine. The CDC then is responsible for buying and replenishing the materials. Eligible medicines are tested by the Food and Drug Administration to check if, and for how long, the expiration date can be extended.

Come October, however, the ASPR will be in charge of choosing the products and then purchasing them for the stockpile. Proponents say the shift makes sense operationally to place key decisions about the repository under one office.

"I think this is a very good move," said Irwin Redlener, director of the National Center for Disaster Preparedness at Columbia University. "It will help coordinate and organize the delivery of vital medical responses."

But critics say it will allow biotech companies to lobby for more of their specialized, and often more expensive, drugs to be included because the federal government is often the only purchaser. Just because the government can buy these products, they say, doesn't mean it should do so given the parallel need for medications, like antibiotics, that have much broader use.

And it's not clear, they caution, whether the new structure will make Americans safer.

The stockpile should contain "the stuff we need for the disasters we know we're going to have - like gloves, syringes, Cipro, penicillin, antibiotics, and influenza vaccines - versus the newest, sexiest version of the anthrax vaccine," said Georges Benjamin, executive director of the American Public Health Association, who was Maryland's health secretary during the 2001 terrorist and anthrax attacks. 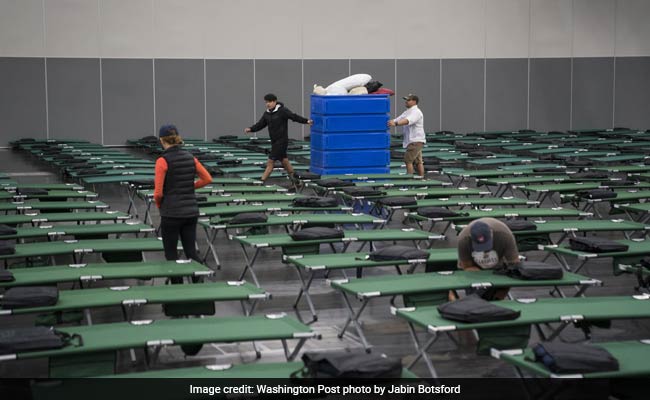 Officials won't say how many stockpile warehouses exist. But there are at least six, according to a 2016 independent report. All the locations are secret, including this one in an industrial complex off a busy highway. A reporter allowed to tour the facility had to agree not to disclose the location. No camera, video equipment or cellphone is permitted inside.

In the early hours of a crisis, the warehouse can send an affected city or region a "12-hour push package," a pre-configured cache of 130 containers of antibiotics, syringes and oxygen tubing, enough to fill the belly of a wide-body plane. "About 50 tons of materiel," said Shirley Mabry, the stockpile's chief logistics officer.

In the section of the warehouse where biologic drugs such as botulism antitoxins are stored at minus-4 degrees Fahrenheit, workers wear full-body insulated suits. Because of the intense cold they are limited to 20 minutes inside the two enormous freezers, just enough time to drive a forklift in and retrieve a pallet of medicine. An intensely loud vibrating sound makes conversation impossible.

Nationwide, the repository contains enough medical countermeasures to add up to more than 133,995 pallets. Laid flat, they'd cover more than 31 football fields - or 41 acres of land. They contain enough vaccine to protect every person in America from smallpox.

The stockpile program was created in 1999 under President Bill Clinton to respond to terrorist events, including the first World Trade Center bombing, the sarin gas attack on the Tokyo subway and the Oklahoma City bombing. The original goal was to be ready for chemical, biological, radiological and nuclear threats. The repository includes nearly 2,000 caches of nerve agent antidotes, known as Chempacks, that are stored and maintained separately from the warehouses at more than 1,300 locations around the country where they can be accessed quickly.

Over time, the stockpile's mission has expanded to include natural disasters and emerging infectious disease threats. The stockpile deployed antiviral medicine during the 2009-2010 swine flu pandemic, and vaccines, portable cots and other supplies during the hurricanes that devastated Houston and Puerto Rico last year. As the only source of botulism antitoxin in the United States, it also sends medicine for about 100 cases a year of severe food poisoning.

The inventory exceeds 1,000 categories of drugs and other items, but CDC's budget hasn't always been able to keep up with the program's ever-growing list of needs.

"It's a mission among many pressing missions among the CDC," said Tara O'Toole, who was undersecretary for science and technology under President Barack Obama and chaired a National Academy of Sciences, Engineering and Medicine committee in 2016 that reviewed the ongoing challenges facing the program. "Bottom line, it's a good idea to lay the responsibility of the cost of maintaining it on the same people who decide what to put in the stockpile."

The group of federal agencies making decisions about what goes in the repository is led by the ASPR office, which is headed by former Air Force physician Robert Kadlec. He is a former special assistant to President George W. Bush on biodefense and former deputy staff director of the Senate Intelligence Committee.

Kadlec stresses that the impending change has nothing to do with CDC's performance. "The question here is whether we can get better efficiencies," he said in an interview. At the same time, he said he will be able to advocate most effectively for the program to give it greater visibility, which could lead to more funding.

"Quite frankly, by the back of the envelope, they need more money," he said.

When the stockpile was established, CDC was the only major public health agency in the federal government. The ASPR office, created in 2006 in the wake of Hurricane Katrina to manage emergency responses across the government, was historically focused on natural disasters and threats from dirty bombs or crude biological or chemical weapons, he said. But since then, the world has changed, with many more unpredictable threats. The ASPR office needs to change to meet these threats. "The decision to move the stockpile, I think, was just a natural one," Kadlec said.

Yet Congress has some bipartisan concerns about the stockpile's future. Republican and Democratic appropriators, who just gave the program budget a slight boost for this year, signaled their unease as part of the recently passed spending bill. They specifically highlighted CDC's "unique expertise in public health preparedness and response, science-based policy and decision-making, public health communication, and coordination with state and local groups."

Lawmakers also "strongly urged" HHS Secretary Alex Azar to "maintain a strong and central role for CDC" in the program.
Kadlec testified April 18 at a House Appropriations subcommittee hearing on next year's HHS biodefense budget. Rep. Tom Cole, R-Okla., who chairs the health subcommittee, told Kadlec his main concern is "that we make this organizational change in a way that makes [the stockpile] stronger, not one that's duplicative, let alone something that might disrupt the relationships we have."

Sen. Patty Murray, Wash., ranking Democrat on the Senate Health, Education, Labor and Pensions Committee, faults the administration for failing to get "any input from Congress" despite the fact that lawmakers are in the process of reauthorizing the law that includes the Strategic National Stockpile.

"We have yet to see proof this large-scale public health program with complex state, local and federal partnerships would be better served at ASPR than at CDC," Murray wrote in a letter in February to Mick Mulvaney, President Donald Trump's budget director. At the CDC, she said, the program "may be better protected from politicization and therefore better able to be scientifically driven."

Mulvaney defended the plan in his response, saying it will "streamline operational decisions during responses to public health and other emergencies and improve responsiveness." It is unlikely that Congress could derail the move, but appropriators have to fund it and still can provide direction and oversight.

Promoted
Listen to the latest songs, only on JioSaavn.com
At CDC, the program's current director is hoping its planned move this fall will provide new ways to improve the stockpile's capability. Regardless of where it is located within HHS, Greg Burel said, in an emergency "we will not change the way we respond."