The Indonesian men were led onto a stage set up outside a mosque in front of a crowd of thousands, who jeered and booed loudly were caned as a punishment for gay sex, in a first for the Muslim-majority country where there is mounting hostility towards the small LGBT community. 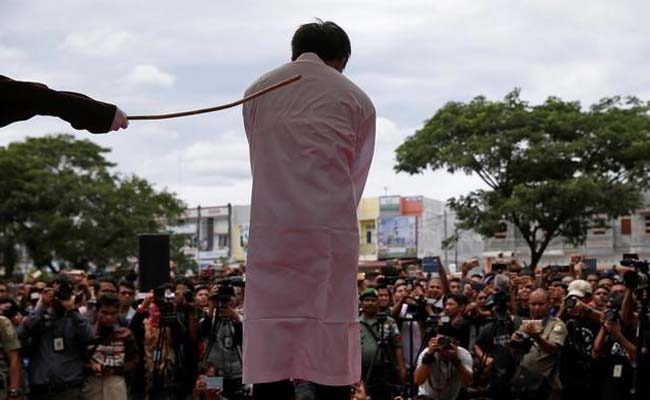 Banda Aceh, Indonesia: Two Indonesian men were caned Tuesday in front of a jeering crowd as a punishment for gay sex, in a first for the Muslim-majority country where there is mounting hostility towards the small LGBT community.

The pair, aged 20 and 23, received 83 strokes of the cane each after being found guilty of breaking sharia rules in conservative Aceh province, the only part of Indonesia that implements Islamic law.

They were led onto a stage set up outside a mosque in front of a crowd of thousands, who jeered and booed loudly.

The pair, whose identities have not been revealed, bowed their heads as they were whipped by officials who wore dark robes and masks with eye slits, and used thin rattan canes.

One of the men grimaced occasionally and the other showed little emotion.

Before the caning, Abdul Gani Isa, a member of the Acehnese clerics' council, told the crowd the caning was "a lesson for the public".

"Lessons carried out with our sharia law are conducted in a very thoughtful way, are educational and do not violate human rights," he said.

Their sentences, which were carried out in the provincial capital Banda Aceh, were reduced by two strokes of the cane due to time already served in detention.

The gay men were caught together in March by vigilantes who burst into the house where they were staying.

Shaky phone footage of the raid that circulated online showed the vigilantes kicking, slapping and insulting the men, with one of them slumped naked on the ground during the attack.

Public caning has long been common for offences such as gambling and drinking in Aceh, which was given the right to implement sharia law in 2001 as part of a deal with the central government aimed at ending an insurgency.

But Tuesday's caning was the first time such a punishment has been meted out for gay sex since a sharia regulation came into force two years ago banning the practice.

Gay sex is not illegal elsewhere in Indonesia, which has the world's biggest Muslim population.

While rights groups have repeatedly expressed alarm over the strengthening of sharia law in Aceh, many of those living in the staunchly Islamic province support the rules.

One of the Indonesian men being caned publicly for having gay sex which is against the Sharia laws.

Zubaidah, a 20-year-old female college student who watched the couple being punished, told AFP it was the first time she had witnessed a caning.

"I wanted to watch it so it could serve as a lesson for me not to commit any act that violates Islamic teaching," said the student, who like many Indonesians goes by one name.

"Homosexuality is a curable disease, it is very forbidden in Islam."

Amnesty International was among groups that had urged authorities not to flog the men, decrying the use of caning as a "cruel, inhuman and degrading punishment and may amount to torture".

There has been a growing backlash against Indonesia's small lesbian, gay, bisexual and transgender (LGBT) community over the past year, with ministers, hardliners and influential Islamic groups lining up to publicly denounce homosexuality.

The caning comes just two days after police in Jakarta detained 141 men including several foreigners for allegedly taking part in a gay sex party at a sauna promoted as "The Wild One".

Although homosexuality is not illegal outside Aceh, police said 10 of those arrested at the party could be charged under the country's tough anti-pornography laws.

The backlash against the homosexual community began in early 2016, and activists believe it was triggered by widespread media coverage of a decision in the United States to legalise same-sex marriage.

(This story has not been edited by NDTV staff and is auto-generated from a syndicated feed.)
Comments
Indonesia CanningHomosexualitySharia laws