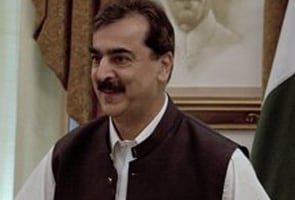 Islamabad: Dialogue is the only way to resolve outstanding issues between Pakistan and India as both countries cannot afford to fight wars, Pakistan Prime Minister Yousuf Raza Gilani has said.

Gilani made the remarks during the debut episode of the live show "Prime Minister Online" in which he answered questions from the public and tried to address their grievances.

"There is a lot of pressure from the public and opposition on (Indian Prime Minister Manmohan Singh) but I believe that dialogue is the only answer. That's the only way forward because we can't afford wars. We must have a dialogue and that will happen," he said.

Gilani was responding to a question on India-Pakistan ties in the aftermath of the 2008 Mumbai incident.

He noted that he had held several meetings with Singh, including one in the Egyptian resort of Sharm el-Sheikh during which they "made a commitment that both countries cannot be held hostage to the Mumbai incident alone".

"However, when Manmohan Singh went back to India, there was pressure on him in Parliament as well as public pressure and so no progress could be made," he said.

Gilani became the first Pakistani Prime Minister to appear on a live television and field questions from the public. The new show will be aired on the first of every month.

During the 50-minute show, Gilani also expressed his government's resolve to launch a jihad against corruption in the New Year by taking legislative measures, including the enactment of an accountability law.

"It is our resolve for the new year that we will launch a jihad against corruption. I have talked to (main opposition PML-N chief Nawaz Sharif) so that we can adopt the accountability bill with consensus. And it will be done in a way that nobody can raise a finger at it," he said.