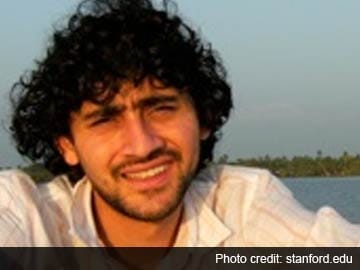 Washington: An Indian-origin scientist has developed a tiny chemistry set which only costs USD 5 and can be used to test water quality and provide affordable medical diagnostic tests in the developing world.

Manu Prakash, an assistant professor of bioengineering at Stanford, has won USD 50,000 to further develop his prototype into a low-cost product, which he thinks can have widespread use both in the developing world and as a creative toy for kids.

The idea for the device came to Mr Prakash from a toy music box. The box used a tiny hand crank to pull a paper ribbon through a set of pins on concentric disks.

When one of the pins hit a hole in the paper, the disk and pin rotated, causing another pin to pluck a metal strip to make a sound.

Mr Prakash got the idea that the rotating pins could also be used to pump fluids through tiny channels or to control valves and droplet generators in a programmable fashion.

After talking to George Korir, student, Mr Prakash started working with him on a way of pairing the hand-cranked toy with a small silicon chip containing tiny channels for manipulating fluids.

Like the music box, the prototype chemistry set includes a hand-cranked wheel and paper tape with periodic holes punched by the user.

When a pin encounters a hole in the tape it flips and activates a pump that releases a single drop from a channel.

In the simplest design, 15 independent pumps, valves and droplet generators can all be controlled simultaneously.

It could even be used in modern labs to carry out experiments on a very small scale.

Although the original prototype was made from music box parts, Mr Prakash and Mr Korir have many versions in which the crank and pins (they call this part the actuator) were printed on a 3-D printer.

They said the actuator, the paper tape and the silicon chip can all be modified to meet different uses, and can be made from inexpensive, durable materials costing less than USD 5.

With the prize money from The Science Play and Research Kit Competition (SPARK), Mr Prakash and Korir hope to continue working toward a product that other groups, including researchers and citizen scientists, can then modify and programme for a wide range of uses, both educational and scientific.

Mr Prakash has also developed a low-cost microscope called Foldscope that can be folded like origami out of paper.