Diplomat Reenat Sandhu on Monday paid tributes to victims of the September 11 terror attacks at a memorial ceremony organised by UN Office of Counter-Terrorism on behalf of the UN and the 9/11 Memorial & Museum. 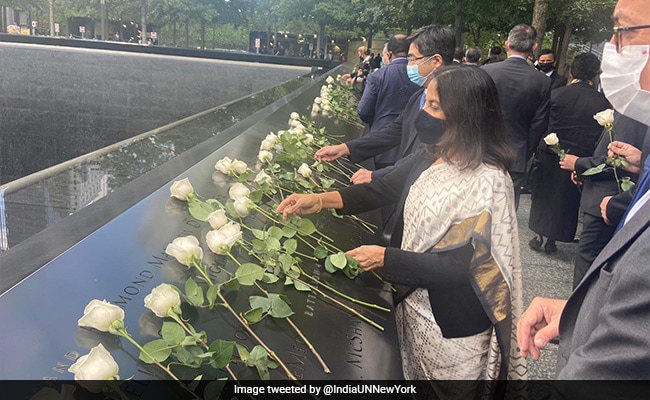 India's Permanent Mission To UN said that terrorism in all its forms is condemnable.

The 9/11 terror attacks, their victims and lessons learnt from the "heinous" assault must not be forgotten, India has said, asserting that terrorism in all its forms and manifestations is condemnable.

Secretary (West) in the Ministry of External Affairs Reenat Sandhu on Monday paid tributes to victims of the September 11 terror attacks at a memorial ceremony organised by the United Nations Office of Counter-Terrorism on behalf of the United Nations and the 9/11 Memorial & Museum.

"We must not forget the heinous terrorist attacks, the victims and the lessons learnt. Terrorism in all its forms and manifestations is condemnable," India's Permanent Mission to the UN said in a tweet.

We must not forget the heinous terrorist attacks, the victims & the lessons learnt. Terrorism in all its forms and manifestations is condemnable.

Ms Sandhu paid a floral tribute at the 9/11 memorial pools that sit in the footprints of the former North and South Towers that had collapsed after American Airlines and United Airlines planes hijacked by al Qaeda terrorists crashed into them.

The names of the 2,983 people who were killed in the 2001 and 1993 terrorist attacks are inscribed on the bronze parapets edging the memorial pools. Victims of the 9/11 attacks were people from over 90 countries, including India.

Prime Minister Narendra Modi visited the 9/11 memorial site in September 2014 and paid a solemn homage to victims of the 2001 terror attack, placing five rose buds one by one on the memorial slabs where names of the victims are etched.

On the eve of the commencement of the annual high-level week of the 76th session of the UN General Assembly, the United Nations held a special tribute ceremony to commemorate the 20th anniversary of the terrorist attacks of September 11, 2001.

The commemoration demonstrated the United Nations' commitment to "never forget" the nearly 3,000 people from over 90 countries whose lives were taken that day, and the thousands more that were injured or sickened, the world organisation said in a statement.

The event was attended by more than 300 participants, including Heads of States, ministers and delegations representing more than 120 Member States and international organisations who have gathered in New York for the opening of the 76th session of the UN General Assembly.

On behalf of UN Secretary-General Antonio Guterres, Under-Secretary-General for Counter-Terrorism Vladimir Voronkov said the world had watched in "horror" as terror struck in New York, the District of Columbia as well as in Pennsylvania.

"But shortly after, the United Nations came together to take action against those responsible for these attacks and others, by first and foremost declaring international terrorism a threat to international peace and security," Voronkov said.

"We have been united in our efforts to prevent such attacks from happening again and to bring terrorists to justice. But we have never lost sight of the plight of the victims. Of their needs. Of their rights. We will not forget them," he said.

Voronkov stressed that the UN will continue to place victims at the heart of its counter-terrorism efforts, continue to speak for those who can no longer speak and amplify the voices of survivors.

"Let me affirm that the United Nations will continue to uphold the rights of victims, and support Member States' efforts to address their needs. That we will stand in solidarity with all victims of terrorism. That they will not be forgotten. That no day shall erase them from the memory of time," he said.

President and CEO of the 9/11 Memorial & Museum Alice Greenwald said that for many, the Memorial is seen as the place where the 21st century began.

"The attacks of September 11, 2001 may have happened here in the United States, but in truth, 9/11 was a global moment," Greenwald said, adding that the 2,977 individuals killed as a result of those attacks represented over 90 nations and they "were a microcosm of the world."

Spain's Minister of Foreign Affairs, European Union and Cooperation Jose Manuel Albares, in his capacity as co-Chair of the Group of Friends of Victims of Terrorism, called on in the international community to "restate our commitment towards our common collaboration to fight against terrorism, and in favor of the victims, their needs and their rights. We owe it to them."

The solemn ceremony included a minute of silence and concluded with Voronkov and Albares laying wreaths in memory of victims of the September 11 attacks, and all victims of terrorism worldwide.

"Through this event, the United Nations reaffirmed its commitment to support all victims of terrorism around the world, and to work together to uphold their rights and needs," the UN statement said.

On September 11 this year, India's Ambassador to the US Taranjit Singh Sandhu had also visited the 9/11 memorial to pay homage to the victims of the terror attacks.

"Paid respects at the 9/11 Memorial in New York today. Remembering all the innocent victims of the dastardly attacks. 20 years on, 9/11 is a stark reminder of the continuing threat of #terrorism. The world must unite against this menace!" Mr Sandhu had said in a tweet.

In a tweet Mr Tirumurti had said, "A moving experience at Ground Zero in New York on 20thAnniversary of 9/11 Terror attack. UNSC paid homage at @Sept11Memorial to lives lost, including many Indians. There are no 'your terrorists' & 'my terrorists' or 'bad terrorists' & 'good terrorists'. Must fight it together."