Neera Tanden, who would have been the first woman of color to lead the powerful budget agency, drew opposition because of past social media posts attacking Republican lawmakers. 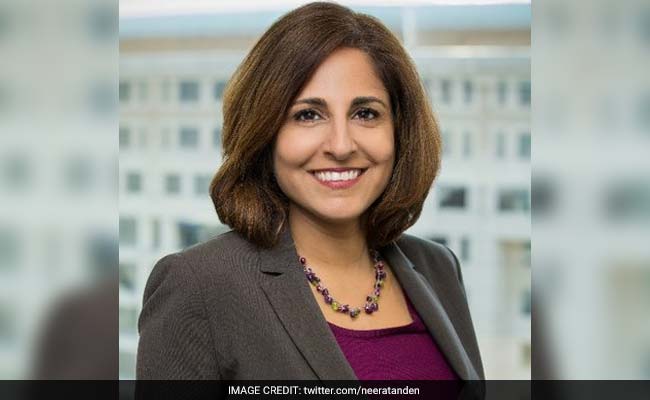 Neera Tanden has deleted more than 1,000 tweets and apologized for her past remarks. (FILE)

The White House withdrew Neera Tanden's nomination to be director of the White House Office of Management and Budget on Tuesday evening after she faced bipartisan opposition for the job - dealing President Joe Biden his first Cabinet defeat in the evenly split Senate.

Tanden, who would have been the first woman of color to lead the powerful budget agency, drew opposition because of past social media posts attacking Republican lawmakers. In a letter to the president withdrawing herself from consideration, Tanden acknowledged that she had no remaining path to confirmation and said she did not want to distract from other priorities.

"I have the utmost respect for her record of accomplishment, her experience and her counsel, and I look forward to having her serve in a role in my administration," Biden said in a statement. "She will bring valuable perspective and insight to our work."

Tanden is "incredibly grateful for your leadership on behalf of the American people and for your agenda that will make such a transformative difference in people's lives," she told Biden.

Her nomination began to collapse last month when Sen. Joe Manchin III, D-W.Va., said he would oppose Tanden for the post, citing her past remarks targeting Republicans. That meant she would need at least one Republican vote to be confirmed in the 50-50 Senate, but potential swing votes including Sens. Susan Collins, R-Maine, and Mitt Romney, R-Utah, also said they would not back her.

She has since deleted more than 1,000 tweets and apologized for her past remarks, although Senate Republicans repeatedly seized on her social media posts to criticize her fitness and temperament for the administration job.

Tanden had called Collins "the worst" and "pathetic," and said "vampires have more heart than Ted Cruz," referring to the GOP senator from Texas. Tanden has compared Senate Minority Leader Mitch McConnell, R-Ky., to "Voldemort," the Harry Potter series villain, and called him "Moscow Mitch."

In turn, Republican senators faced accusations of a double standard when it came to Tanden and her Twitter posts, considering how often they feigned ignorance about President Donald Trump's social media feeds during his administration. Trump regularly aimed furious insults at an array of people who angered him, including foreign leaders and Democratic lawmakers.

In recent days, attention had largely turned to Sen. Lisa Murkowski, R-Alaska, who has been weighing whether to support Tanden and met with the nominee earlier this week. Murkowski had not announced her decision when Tanden withdrew Tuesday.

By the time her nomination was withdrawn, Tanden had met with 46 senators, who were immediately lobbied by incoming administration and key advocacy groups once Biden announced her nomination in December.

Tanden had the endorsement of the U.S. Chamber of Commerce and powerful labor unions such as the Communications Workers of America. She also had strong support from leaders and activists representing the Asian American community.

But Tanden, a longtime operative, had taken on any number of powerful figures on Capitol Hill. A centrist Democrat, she had also tangled in the past with Sen. Bernie Sanders, I-Vt., who now chairs one of the two Senate committees that took up her nomination.

Sanders was informed by the White House earlier Tuesday that Tanden would be withdrawing from the job, according to one aide familiar with the conversation who spoke on the condition of anonymity to discuss the matter. Murkowski had reiterated earlier Tuesday that she remained undecided on Tanden.

First-term presidents typically face defeat on at least one Cabinet post as they staff up their administration, and Biden was no exception. Trump withdrew the nomination of Andrew Puzder for labor secretary, and former president Barack Obama dropped Tom Daschle as his pick for health secretary, in the early weeks of their administrations.

Neither of Biden's immediate predecessors had the barest of majorities in the Senate that Biden does, with one defector from his own party able to derail a nomination or a top policy priority, such as a massive coronavirus relief package that senators will take up later this week.

Although Manchin was the only senator from the Democratic caucus to make his opposition to Tanden public, Democratic officials were also concerned about how Sanders and Sen. Kyrsten Sinema, D-Ariz., would vote. Sinema sits on the Homeland Security and Governmental Affairs Committee, the other panel that considered Tanden.

Democratic leaders abruptly postponed the two committee votes for Tanden last week amid uncertainty about the outcome. Even as the White House was preparing to pull Tanden's nomination on Tuesday, Sanders said in a CNN interview that he remained undecided on her fate and acknowledged that she did not have the votes "right now."

Senior Senate Republicans suggested that Murkowski was seeking Alaska-specific concessions from the White House as she continued to hold out on the OMB pick, although the senator said earlier Tuesday that she had not asked the administration to "make any accommodations to me or to Alaska for the Tanden nomination, or any nomination."

After Tanden withdrew, Murkowski added, "I think we all have an obligation to figure out how we're going to vet the nominees, and I take each one of them seriously."

Murkowski did not make her position on Tanden clear, saying only that she did not tell the White House that she was opposed to her. "She's a really strong woman, I'll tell you that," the senator said.

Tanden's defeat was a disappointment to Asian American advocacy groups, which had pressured Biden to nominate more Asian American and Pacific Islander officials to his administration. Biden had tapped two for his Cabinet - Tanden and Katherine Tai, who has been nominated as U.S. trade representative - but neither post carries the title of secretary, the first time in two decades that no Asian American was named as one.

"We expect the highest levels of professionalism and civility from our leaders in government, which is precisely what Neera displayed in taking responsibility for her past comments and committing to a change in tone," Rep. Judy Chu, D-Calif., leader of the Congressional Asian Pacific American Caucus, said Tuesday. "I'm disappointed that such a qualified candidate was subject to such a negative double standard."

Administration officials did not immediately indicate whom Biden would nominate instead of Tanden, although senior Democrats have increasingly talked up Shalanda Young, who had initially been chosen as Tanden's deputy at OMB. Young is a former staff director for the House Appropriations Committee and has long been respected by senior Republicans as well as Democrats.

Just hours before the White House pulled Tanden's nomination, Young appeared before the Senate Budget Committee, where she won praise from Democrats and Republicans. GOP senators made it clear they would prefer her for the top OMB job.

Sen. Lindsey Graham of South Carolina, the ranking Republican on the panel, heaped praise on Young and hinted at her potential elevation, telling her: "You'll get my support, maybe for both jobs."

Sen. John Neely Kennedy, R-La.. was more blunt: "You may be more than deputy."

While Republicans did not hide their support for her, Young was careful throughout the hearing to compliment Tanden, showing no signs of the impending withdrawal. She said that she and Tanden would "make a great team if both of us were confirmed."

Democrats on the committee, too, lauded Young's work in Congress, but they remained united in supporting Tanden.

If Biden taps Young for the top spot, a number of people under consideration for the director job could be considered for the deputy role, including Ann O'Leary, a longtime Hillary Clinton policy aide, Sarah Bianchi, a longtime Biden policy aide,and Martha Coven, a former OMB official in the Obama administration.