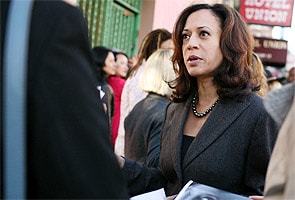 Washington: Indian-American Kamala Harris, California's next Attorney General, is the "female Obama" in making and likely to be a national figure shortly, a media report said on Saturday.

Daughter of an Indian mother and African-American father, Harris is being called the future of the Democratic Party, a rising political star in the mold of one of her big supporters  President Barack Obama, the 'Politico' said in a lead story.

"At first glance, the President and Harris have much in common: Both are mixed-race children of immigrants raised by a single mother; both are eloquent, telegenic big-city lawyers with strong liberal credentials who catapulted from relative obscurity to the national stage.

She is a rare talent who will be a national figure shortly, Chris Lehane, a former Clinton aide, who is now a consultant in California, was quoted as saying.

She was overwhelmingly re-elected to a second term in November 2007.

Born and raised in the East Bay, Kamala is the daughter of Dr Shyamala Gopalan, a Tamilian breast cancer specialist who traveled to the US from Chennai to pursue her graduate studies at UC Berkeley.

Harris has spent the majority of her professional career in the trenches as a courtroom prosecutor.

Like Obama, Politico said, Harris has sought to avoid being tied to Democratic orthodoxy.

Her "smart on crime" approach in San Francisco included cracking down on truancy  including charging the parents of chronically truant children with a misdemeanour punishable by jail time and a fine.

Civil libertarians and conservatives alike raised questions about the move but Harris was unapologetic, she said.

"Harris' new post gives her an instant national platform: Her predecessors in the post, including California Governor-elect Jerry Brown, used the office to influence national environmental policy, while New York Governor-elect Andrew Cuomo, who was his state's top prosecutor, raised his profile as a crusader for consumer rights," the news article said.

Given California's giant auto and utilities markets, Harris can position herself as a major player in shaping federal climate policy and in using her post to drive federal environmental policy if Washington doesn't act.

Promoted
Listen to the latest songs, only on JioSaavn.com
"We are making decisions about suing the EPA (Environmental Protection Agency) around what we want to do around our standards, and whether there should be national standards," Harris told Politico.

"I want to use my position of leadership to help move along at a faster pace what I believe and know the Obama administration wants to do around the urgency of climate change," she said.