IKEA said in a statement that Ingvar Kamprad "passed away peacefully surrounded by his loved ones" at his home in the southern Swedish region of Smaland on Saturday "following a brief illness". 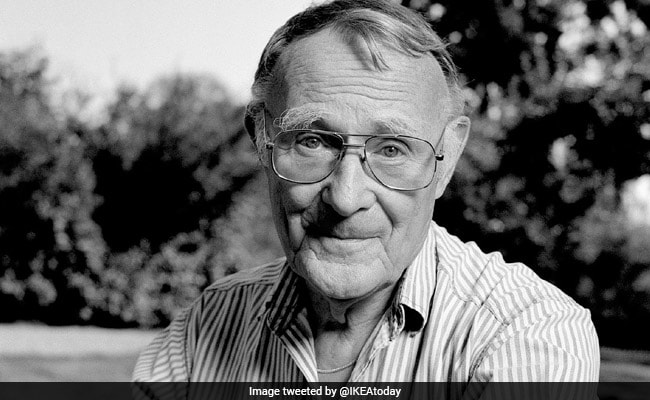 STOCKHOLM: IKEA founder Ingvar Kamprad, who built a global business empire with revolutionary flat-pack furniture and was known for his contempt for taxes, died aged 91, the Swedish furnishing giant said on Sunday.

The company said in a statement that Kamprad "passed away peacefully surrounded by his loved ones" at his home in the southern Swedish region of Smaland on Saturday "following a brief illness".

"His legacy will be admired for many years to come and his vision - to create a better everyday life for the many people - will continue to guide and inspire us," Jesper Brodin, CEO and president of the Ikea Group, said in the statement.

Born in 1926 to a farming family in the southern Swedish region of Smaland, Kamprad founded the company at age 17.

Despite his enormous success and wealth, Kamprad's modest spending habits bordered on the obsessive.

The founder of IKEA and one of the greatest entrepreneurs of the 20th century, Ingvar Kamprad, has passed away at the age of 91. pic.twitter.com/DxyALH1LQ9

In 1973 he fled Sweden's higher tax structure for Denmark before seeking even lower taxes in Switzerland.

Starting in 2010 Kamprad gradually made way at the helm of the company for his three sons, finally returning to live in Sweden in 2014.

Kamprad announced in 2013 that he would be stepping down from the board of Inter Ikea, owner of the furniture giant's concept and brand, and his youngest son became chairman.

The Consortium of Investigative Journalists in 2014 cited leaked tax files from Luxembourg when it identified Ikea as one of the giant multinationals fingered for corporate tax avoidance by shuffling money to tax havens.

Last year, the European Commission announced that it had launched an investigation into Ikea's tax deals in the Netherlands.

The group insists that it complies fully with national and international tax regulations.

Promoted
Listen to the latest songs, only on JioSaavn.com
Kamprad was also known for his ties to the Swedish Nazi party during his early days.

Sweden was neutral in World War II, and its Nazi party remained active after 1945. The Ikea founder said he stopped attending its meetings in 1948.
Comments
Ingvar KampradIkea founder