The cold snap has already been linked to several deaths, as well as postponing an Italian football match and causing traffic chaos. 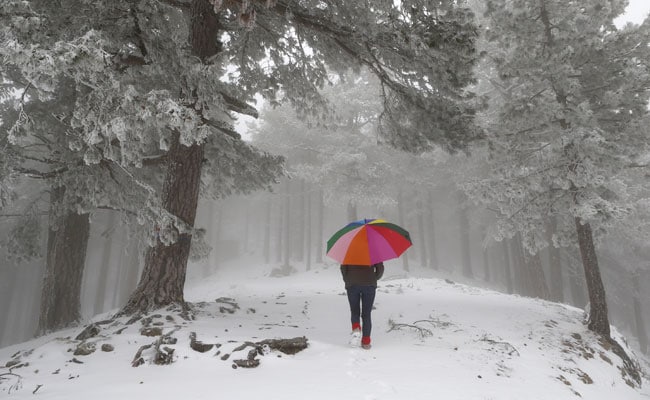 Paris, France: A wintry blast of freezing temperatures swept across Europe on Sunday, with a biting wind from Siberia claiming four lives and endangering the continent's homeless -- with the worst yet to come.

The "Beast from the East", as the phenomenon has been dubbed by the British media, is expected to bring chilling winds from Russia over the next week that will make it feel even colder than thermometers indicate.

The cold snap has already been linked to several deaths, as well as postponing an Italian football match and causing traffic chaos.

In France, where temperatures were forecast to drop to minus 10 degrees Celsius (14 degrees Fahrenheit) and feel as low as minus 18 C over the coming days, fears ran high for people living on the streets.

A homeless man in the city of Valence in the country's southeast was found dead on Sunday, and another man was found dead in his cabin in the suburbs of Paris on Friday.

France has opened up extra emergency shelters for the homeless, and in Calais in northern France, about 200 migrants were spared the cold on Saturday night.

Over a year after the French government razed the sprawling Jungle camp, there are still hundreds of migrants around the port of Calais, hoping to stow away on trucks to Britain.

"I'm lucky to be in here where it's warm, outside it's impossible because of the cold," 20-year-old Afghan Shafiq said.

Britain's weather service, the Met Office, forecast that northern England would have 10 centimetres (four inches) of snow over the next three days, amid temperatures that could feel as cold as minus 15 Celsius.

The front page of the Daily Express newspaper on Friday warned: "Wrap up warm! Freezing cold 'Siberian Express' is roaring towards Britain."

Russia itself was not spared, with its meteorological service warning of "abnormally cold" temperatures until Wednesday and temperatures in the Moscow region expected to fall to minus 24 Celsius on Sunday night, and minus 35 Celsius in the centre of the country.

Two people died of the cold in Poland on Friday night, bringing the winter's toll to 46 since November, according to the centre for national security.

Frigid temperatures are also forecast throughout Germany, with a low of minus 22 Celsius in some Alpine valleys in the southern state of Bavaria on Monday.

Heavy snow in the north Italian city of Turin caused a Serie A football game between Juventus and Atalanta to be postponed on Sunday.

Schools will be closed on Monday due to the snow in Rome, with minus 6 C forecast on Sunday night, and authorities advised drivers to avoid trips in potentially risky mountainous regions due to snow and ice.

In Austria, temperatures will drop below minus 20 C on Sunday night and feel even colder.

"It will feel like minus 30," Stefan Kiesenhofer of the Austrian meteorological service ZAMG told the Oesterreich newspaper.

A cold snap like this "comes every seven to 10 years," he said.

Hungary has been on alert since Saturday, while heavy snow closed some schools in Croatia on Saturday.

Schools were also closed in Romania's capital Bucharest, as well as three areas in the country's south, with more snowfall expected amid lows of minus 15 C to minus 20 C.

Pregnant women and dialysis patients in several parts of the country were encouraged to go to hospital to avoid being stranded at home in case of an emergency.

Spain's weather agency warned of "significant snowfall" on the Iberian Peninsula and the Balearic Islands.

Warmer at the North Pole?

However a brave few did take advantage of the Siberian chill, with some adventurous Dutch ice skaters taking to the country's canals and lakes.

Dutch authorities have strongly discouraged skating on natural bodies of water, but said conditions may be more favourable after a few chilly days in the north of the country for those keen to emulate their Winter Olympians.

The freezing temperature also did not prevent a few hundred swimmers jumping into the Meuse river, which was 3 Celsius while it was minus 2 Celsius outside, in the Huy region of Belgium on Sunday morning.

But below average temperatures are not forecast everywhere.

Promoted
Listen to the latest songs, only on JioSaavn.com
Many areas across Europe could be colder than the North Pole this week, with the temperature at Cape Morris Jesup weather station at the top of Greenland having risen above freezing several times since mid-February, according to the World Meteorological Organisation.

Siberia ColdBeast from the East