The iceberg, which is expected to break from the Larsen C ice shelf, is roughly the size of Delaware. 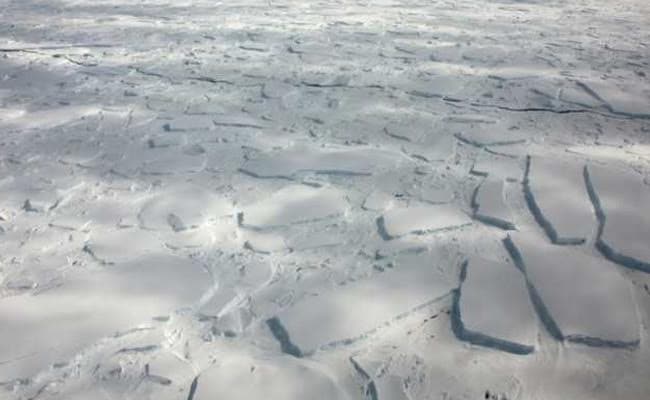 An enormous iceberg, over 2,000 square miles in area - or nearly the size of Delaware - is poised to detach from one of the largest floating ice shelves in Antarctica and float off in the Weddell Sea, south of the tip of South America.

Scientists have been expecting the break from the Larsen C ice shelf, monitoring the progress of a crack which extended to over 100 miles long in recent months. The latest update from scientists with NASA and the University of California, Irvine found that only 3 remaining miles of ice continue to connect the impending iceberg to the larger shelf.

Those parts of the iceberg that have already detached have begun to move rapidly seaward, widening the rift in recent days and leaving the remaining ice "strained near to breaking point," according to Adrian Luckman, a scientist monitoring Larsen C at Swansea University in Wales.

The expected calving event - on its own - will not affect global sea level, because the ice that has detached was already afloat in the ocean. But some scientists fear that it could hasten the destabilization of the larger Larsen C ice shelf.

The iceberg itself will be enormous - one of the most massive ever seen from Antarctica. It will be over 600 feet thick and contain roughly 1 trillion tons of ice, according to an analysis by the European Space Agency and Noel Gourmelen, a scientist at the University of Edinburgh.

Scientists are divided about the impact of climate change on this particular break in Antarctica's ice shelf.

Some have contended there's little proof that the break, which will reduce the size of the Larsen C more than scientists have observed previously, reflects the advance of climate change. Ice shelves do, after all, break off sometimes.

"We do not need to press the panic button for Larsen C. Large calving events such as this are normal processes of a healthy ice sheet, ones that have occurred for decades, centuries, millennia - on cycles that are much longer than a human or satellite lifetime," Helen Amana Fricker, an Antarctic scientist at the Scripps Institution of Oceanography, wrote recently.

"Of course this is due to climate warming in the peninsula," Eric Rignot, a NASA and University of California Irvine expert on Antarctica, said in an email.

Antarctica has seen an increase in breaks in its ice shelves in recent years.

The Larsen A ice shelf, far closer to the northern tip of the Antarctic peninsula - and therefore, warmer latitudes - collapsed in 1995. In 2002, the same thing happened with Larsen B, its southern cousin, situated slightly closer to the South Pole.

Now, Larsen C, still further toward the south pole and subject to somewhat cooler temperatures, has seen a major break.

But there are big gaps in scientists' knowledge about what might have disturbed the Larsen C ice shelf.

Recent studies have suggested that the ice of Larsen C has begun to flow more quickly to the sea through the shelf in recent years. The ice shelf has also been thinning and its surface has been getting lower in the water, suggesting that it might be melting from below.

But Fricker presented data to suggest that the ice shelf has since begun to thicken again.

"Yes, I agree Larsen C is 'next in line' southwards after Larsen A and B," Fricker said by email. "However, there is actually no research showing that Larsen C is getting thinner and flowing faster. In fact, in recent years, it is the opposite."

There is a similar debate over whether this individual break will destabilize the ice shelf and lead to further disintegration.

According to Rignot, Larsen C holds back around 1 centimeter of global sea level rise in the form of glaciers feeding into the remaining ice shelf. If the ice shelf were to continue to disintegrate, this ice might flow more rapidly into the sea.

An even larger fear is the southward and poleward progression of ice shelf collapse, Rignot said, pointing out that farther south there are ice shelves that, by stabilizing glaciers, are currently preventing vastly more sea level rise than Larsen C does.

Larsen C is among Antarctica's largest ice shelves but still pales in comparison to the Ross Ice Shelf and Filchner-Ronne Ice Shelf. Earlier this month, scientists reported a major melt event that occurred several years ago atop the surface of the Ross Ice Shelf accompanied by at least some rainfall, which also gave them concern.

Scientists will be watching the break closely and trying to glean lessons about what to expect from other potentially vulnerable ice shelves in Antarctica.

Promoted
Listen to the latest songs, only on JioSaavn.com
"While it might not be caused by global warming, it's at least a natural laboratory to study how breakups will occur at other ice shelves to improve the theoretical basis for our projections of future sea level rise," said NASA's Tom Wagner, who directs the agency's polar programs.