I Posted A Huge Note For The Thief Who Stole My Bike. Then My Doorbell Rang

Okay, it was a big note. Armed with yellow paint, I crafted an 8-by-3-foot cardboard sign and hung it across the entire front of my landlord's Brooklyn brownstone (with his permission). 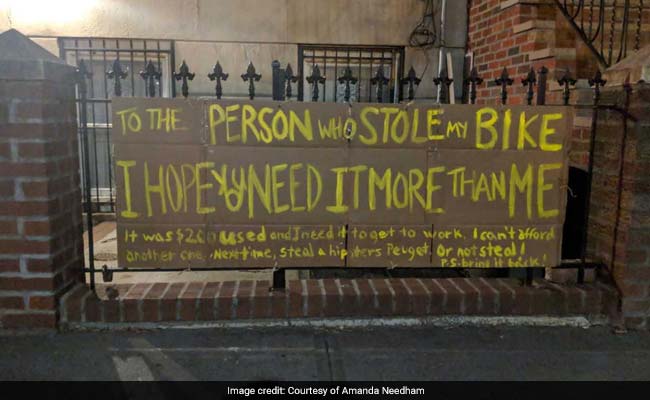 The sign Amanda Needham painted and hung on her New York brownstone after her bike was stolen.

My bike was stolen on a weekend in early March. It was half my fault, half my husband's fault, and 100 percent the fault of the person who stole it. Left with a lock, a front wheel and a heavy heart, I did the only thing I could think of: I decided to leave the thief a little note.

Okay, it was a big note. Armed with yellow paint, I crafted an 8-by-3-foot cardboard sign and hung it across the entire front of my landlord's Brooklyn brownstone (with his permission). It said:

"To the person who stole my bicycle

"I hope you need it more than I do.

"Next time, steal a hipster's Peugeot.

(For those of you who are not into bikes, Peugeots are fancy bikes that can cost thousands of dollars.)

I felt a little foolish writing the sign. After all, if my husband and I had spent nearly as much time double securing my bicycle as I did writing the sign, I might not be in the situation. But I knew other people's bicycles had been stolen in the neighborhood, and the least I could do was acknowledge what had happened. I left it up for seven days. 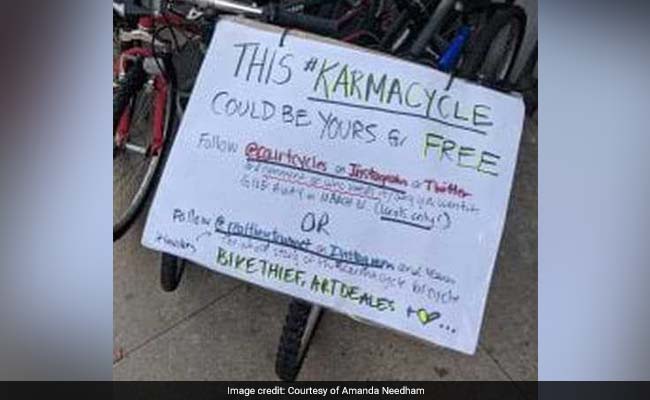 The bike that was given to Needham after hers was stolen. She plans to pass it on to someone who needs it

The following Wednesday evening, I got the first knock on my door. Standing outside were two young African American men, maybe 24 and 16. One of them was carrying a blue mountain bike fit for a teen.

"Are you the one who got your bike stolen?" asked the guy, who introduced himself as Michael. "I had that happen to me as well, and I had this bike lying around, so I figured you might be able to use it."

I was flustered by the offer and tried to deflect, saying I really appreciated it, but wasn't sure if I'd be able to use it. What was clear, however, was that it wasn't about the bicycle, it was about their desire to help. I accepted, touched by the humanity of the gesture.

A snowstorm came the next day, and my husband suggested I take the sign down. I refused - my bike was stolen on the weekend, so the sign would stay up until the next weekend.

The next Saturday morning, I got a second buzz on the intercom. On my doorstep was a petite, middle-aged Hispanic woman in a pink Gap sweatshirt and leggings. She said she lived in Jersey but worked in the neighborhood and made her husband drive twice around the block so she could fully read my sign. When she read that I needed it to get to work, she made him stop the car to see if there was anything she could do.

"What kind of bicycle do you need?" she asked. "I don't know much about bicycles, but if I find one, I'll bring it to you."

I told her that I had signed up for the CitiBike bike-sharing program as a stopgap, and since it was $14.99 a month, I could use that for now. I told her what mattered most was that she stopped. I thanked her again.

"I looked up that Peugeot you wrote about and that's an expensive bike!" she exclaimed.

"Yes it is!" I laughed in agreement.

Then she leaned in and gave me a big hug.

I was invigorated. This sign was changing things. So much decency was pouring out from such a simple gesture of opening myself up to the universe.

The buzzer rang again the moment I got upstairs.

"Take down the sign, Amanda!" my husband yelled after me as I turned to run back down the stairs.

This time, it was an energetic, salt-and-pepper haired white guy.

"That's very kind of you," I said, and explained how I'd also received a kid's bike and a hug, and what mattered most was that people cared.

I laughed out loud and told him that if he indeed did that, I would most certainly buy a new (used) bicycle with his money.

"I'm an art dealer," he explained, "and there's definitely some craftsmanship in this sign."

His name was Steve Powers, and I told him the sign was his, and that he could auction it for $40,000 for all I cared (as long as I was invited to the party). As we pulled the cardboard away from its string attachments, he said that there was an Instagram conversation going about it. He and Robert Young, an antiques dealer in Britain, had agreed to each purchase an equal share of my sign.

The #KarmaCycle had gone global. It was quite a morning. First of all, I had $200 in cash that I actually needed if I'd ever be able to afford a new bicycle. But I was also part of a wave of goodness that felt beautiful and real and inspiring. I realized I didn't want it to just stop with me.

I went up the street to Court Cycles, the local bicycle store run by JoAnne Nicolosi, a female mechanic and small business owner since 1987. I told her what happened, and asked if she could help me fix up the kid's bicycle that Michael gave me and help find it a home. It's just a regular department store kid's bike - but I figure someone out there can use it more than I can.

So that's what we're doing. In exchange for fixing it up, I helped set her up on Instagram and Twitter so we could share the story of the #KarmaCycle, and maybe keep it going.

(This story has not been edited by NDTV staff and is auto-generated from a syndicated feed.)
Comments
Bike thief#KarmaCycle