'I am scared of you': Reeva Steenkamp told Oscar Pistorius in text message 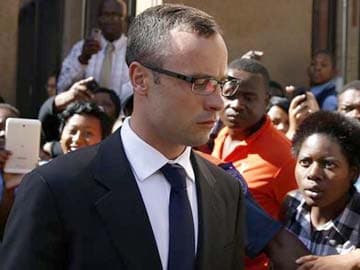 Olympic and Paralympic track star Oscar Pistorius (L) leaves after his trial for the murder of his girlfriend Reeva Steenkamp, at the North Gauteng High Court in Pretoria on March 24, 2014.

Pretoria: Oscar Pistorius' girlfriend, Reeva Steenkamp, admitted to being scared of the South African track star in a text message sent less than three weeks before he shot her dead, a police expert told during his murder trial on Monday.

The Olympic and Paralympic athlete is on trial for the murder of 29-year-old model and law graduate Ms Steenkamp on Valentine's Day 2013.

He has pleaded not guilty to murder, saying he was deeply in love with Ms Steenkamp, whom he had been dating for a few months, and that he mistook for an intruder hiding in a toilet at his luxury Pretoria home.

However, text messages between the pair in the weeks leading up to the shooting painted a picture of a volatile, stormy relationship, with Ms Steenkamp accusing Pistorius of jealousy and outbursts of anger.

"I'm scared of you sometimes and how you snap at me and of how you will react to me," one message sent by Ms Steenkamp on January 27, 2013 said. It was read out in court by police expert Francois Moller on Day 14 of the trial.

Promoted
Listen to the latest songs, only on JioSaavn.com
"We are living in a double standard relationship. Every five seconds I hear about how you dated another chick. You really have dated a lot of people yet you get upset if I mention one funny story with a long-term boyfriend," it continued.

Prosecutors are seeking to prove that Pistorius tried to kill Ms Steenkamp deliberately by firing four rounds from a 9 mm pistol through a locked toilet door after a heated argument.
© Thomson Reuters 2014
Comments
Oscar Pistorius