The second major hurricane to rage through the Caribbean this month, Maria has killed 32 people and devastated several small islands, including St. Croix in the US Virgin Islands and Dominica 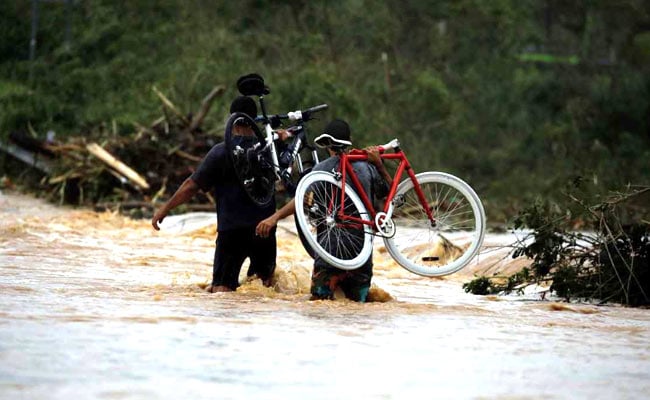 SAN JUAN, Puerto Rico: Hurricane Maria destroyed buildings and knocked out power across Puerto Rico before flooding parts of the Dominican Republic and then regaining some of its strength as it approached the Turks and Caicos Islands and southeastern Bahamas late on Thursday.

The second major hurricane to rage through the Caribbean this month, Maria has killed at least 32 people and devastated several small islands, including St. Croix in the U.S. Virgin Islands and Dominica.

Among those were eight people who drowned in Toa Baja, about 20 miles (32 km) west of San Juan, Mayor Bernardo Marquez told the newspaper, adding the names of those who died have not been released and the causes of death had to be confirmed through autopsies.

More than 4,000 people had been rescued from flooded areas of Toa Baja, the mayor was quoted as saying.

Three elderly sisters were killed by a mudslide on Wednesday in the mountainous central municipality of Utuado, El Nuevo Daa said, citing relatives and the mayor of Utuado.

Maria, headed toward the Turks and Caicos islands, is now a Category 3 hurricane on the five-step Saffir-Simpson scale, with sustained winds of up to 125 miles per hour (205 km per hour). It was 65 miles (110 kms) east-southeast of Grand Turk Island as of 11 p.m. EDT (0300 GMT), the U.S. National Hurricane Center said.

Maria was expected to bring as much as 40 inches (102 cms) of rain to Puerto Rico and 8 to 16 inches (20 to 40 cm) to the Turks and Caicos, which could cause flash floods and mudslides, the NHC said.

Maria's strength was not expected to change during the next few days, the center said. The storm looked unlikely to hit the continental United States but its storm swells will reach the U.S. southeastern coast from Friday, the NHC said.

Officials in Puerto Rico were assessing the damage after Maria slammed the island on Wednesday with winds of up to 155 mph (250 kph). Ranked a Category 4 storm when it made landfall, it was the strongest hurricane to hit the island in nearly 90 years.

U.S. President Donald Trump told reporters the island had been "totally obliterated" and that he planned to visit.

"If it is not an emergency situation, people should remain in their homes or shelters," he was quoted as saying by El Nuevo Dia.

Maria struck Dominica as a Category 5 storm on Monday night, damaging about 95 percent of the roofs on the island, the U.N. Office for the Coordination of Humanitarian Affairs said. At least 14 people died, CNN quoted Charles Jong, a spokesman for the Dominica prime minister's office, as saying.

Two people were killed in the French territory of Guadeloupe and one person on the U.S. Virgin Islands.

Utility crews from the U.S. mainland were headed to Puerto Rico to help try to restore the battered power grid and the U.S. military sent ground forces and aircraft to assist with search and rescue.

More than 95 percent of wireless cell sites were not working on Thursday afternoon on the island, the U.S. Federal Communications Commission said. In the U.S. Virgin Islands, more than three-quarters of cell sites are out of service.

Puerto Rico was already facing the largest municipal debt crisis in U.S. history, and a team of judges overseeing its bankruptcy has advised involved parties to put legal proceedings on hold indefinitely as the island recovers, according to a source familiar with the proceedings.

In the historic heart of the island's capital San Juan, which has a fort and buildings from the Spanish colonial era, the storm left a litter of wreckage.

Roads were blocked by downed foliage and firefighters and rescue officials wielded chain saws to cut through the debris.

San Juan airport reopened for military and relief flights on Thursday, with plans for a limited resumption of commercial flights on Friday.

With electricity and communications knocked out across the island, workdays evaporated and people busied themselves with securing food, checking on their battered homes and collecting rain water.

'Worst is behind us'

Maria passed close by the U.S. Virgin Island of St. Croix, home to about 55,000 people, early on Wednesday as a rare and ferocious Category 5 storm, knocking out electricity and most mobile phone service.

"The worst is behind us," Virgin Islands Governor Kenneth Mapp told reporters on Thursday. "Now is (the) time to march forward and build a better community, a better territory."

The government has imposed a 24-hour curfew until further notice.

About 600 people throughout the U.S. Virgin Islands are in emergency shelters and many parts are without power, Mapp said.

Irma, one of the most powerful Atlantic storms on record, killed at least 84 people in the Caribbean and the United States. It followed Harvey, which killed more than 80 people when it hit Texas in late August and caused historic flooding in Houston. More than two months remain in the Atlantic hurricane season, which runs from June 1 to Nov. 30.