There were no reports of injuries, but roads were closed because of flash floods and landslides in the Pacific island state. 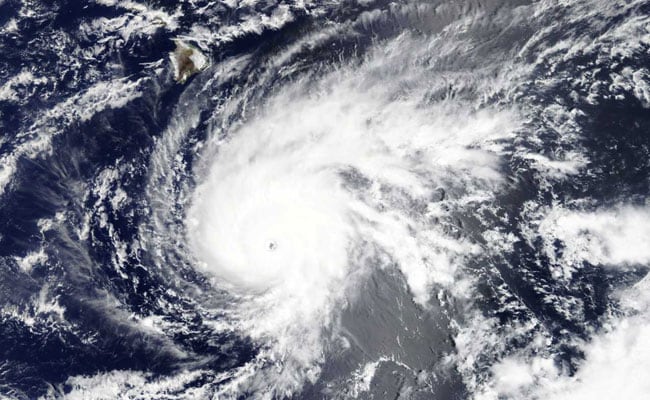 Hurricane Lane, a powerful Category 3 storm, lashed Hawaii on Thursday with high winds and torrential rain, causing flash floods, landslides and raging surf as residents hunkered down to ride out the storm.

The storm spun in the Pacific Ocean about 170 miles (280 km) southwest of Kailua-Kona and nearly 20 inches (51 cm) of rain had fallen on the eastern side of the Big Island of Hawaii, the National Weather Service (NWS) said.

"There's lots and lots of rain, torrential rain, with a lot of moisture in the atmosphere," NWS meteorologist Chevy Chevalier said, noting there were reports of 50 miles per hour (80 km/h) wind gusts. "We're in it now."

There were no reports of injuries, but roads were closed because of flash floods and landslides in the Pacific island state. Tourists were advised to stay away from a popular attraction on the island of Maui called the Seven Sacred Pools, a scenic cluster of waterfalls and grottos.

Evacuations were underway on parts of Molokai and Maui islands while power outages were being reported on social media.

The latest predictions showed the eye of the storm twisting west of the Big Island on Friday morning before glancing past Maui and several other islands later in the day on its way to Oahu. But authorities warned the islands could still expect to be hit hard.

Lane shifted from heading northwest and was headed north at 6 miles per hour as the Category 3 storm on the five-step Saffir-Simpson scale was packing winds of 120 mph (195 kph), the service said in an evening advisory.

"We're telling everybody to take the storm seriously, make your final preparations, and be prepared to ride out what is going to be a prolonged rain event," said Andrew Pereira, communications director for the city and county of the state capital Honolulu.

The National Hurricane Center warned storm surges could raise water levels 3 to 5 feet (1 to 1.5 metres) above normal along the western shores of the Big Island and that extreme rainfall could mean "numerous evacuations and rescues."

Ige has urged residents to set aside a 14-day supply of water, food and medicine. All public schools, University of Hawaii campuses and non-essential government offices on the islands of Oahu and Kauai were closed at least through Friday.

"We are in our room at Alohilani Resort waiting for Hurricane Lane to arrive," said Janina Ballali on Twitter. "Hopefully, the hurricane will have mercy with our beloved Oahu."

Par Pacific Holdings Inc said it had shut its 93,500 barrel-per-day refinery in Kapolei due to the storm.

In Hanalei on Kauai, rain fell Thursday as residents and businesses prepared for the hurricane while tourists continued to shop and dine in places that were still open.

Dave Stewart, owner of Kayak Hanalei, had boarded up the windows on his shop by mid-afternoon and moved the company's rental kayaks to high ground.
He said he wasn't taking any chances, having lived through severe flooding on Kauai's North Shore in April and through Hurricane Iniki in 1992.

"That was total destruction," he said of Iniki. "Seven out of 10 telephone poles were down, so even if your house was OK, you couldn't get out."

Iniki was the most powerful hurricane on record to hit Hawaii, making landfall on Kauai island on Sept. 11, 1992, as a Category 4. It killed six people and damaged or destroyed more than 14,000 homes.
The shelves of a downtown Honolulu Walmart were stripped of items ranging from canned tuna to dog food, bottled water and coolers full of ice.

Video footage showed whipping palm trees and darkening skies in Maui. In the Manoa Valley neighborhood in Honolulu, sidewalks typically full of joggers and dog walkers were empty as residents stood outside their homes watching the skies and businesses closed early for the day.

President Donald Trump declared a state of emergency for Hawaii and ordered federal authorities to help supplement state and local responses, the White House said on Thursday. The Coast Guard has ordered all harbors to close to incoming vessels and the U.S. Navy moved most of its fleet out of Pearl Harbor, where ships could provide aid after the storm.

Since Hurricane Maria devastated Puerto Rico last year, the Federal Emergency Management Agency has made changes to how it works, FEMA Administrator Brock Long said at a briefing in Washington, making sure generators are in place so they can provide power to residents and quickly restart the water system.

"It's not just providing food and water. If you fix the power first, you solve 90 percent of the problems," he said.