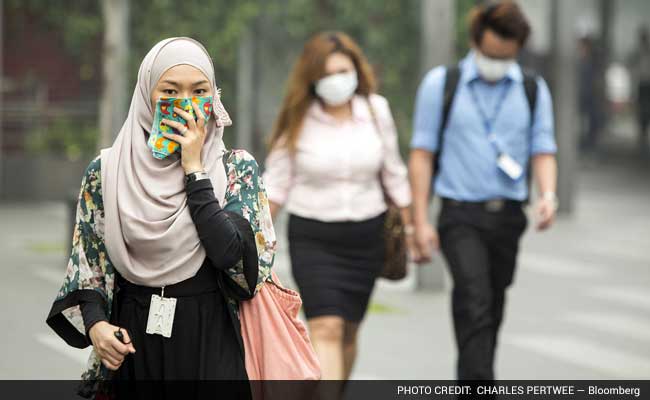 Commuters wear masks this month against a choking haze in Kuala Lumpur, Malaysia.

It has choked Singapore with smoke, triggered Pacific typhoons and left Vietnamese coffee growers staring nervously at dwindling reservoirs. In Africa, cocoa farmers are blaming it for bad harvests, and in the Americas, it has Argentines bracing for lower milk production and Californians believing that rain is finally, mercifully on the way.

El Nino is back and in a big way.

Its effects are just beginning in much of the world -- for the most part, it hasn't really reached North America -- and yet it's already shaping up potentially as one of the three strongest El Nino patterns since record-keeping began in 1950. It will dominate weather's many twists and turns through the end of this year and well into next. And it's causing gyrations in everything from the price of Colombian coffee to the fate of cold-water fish.

Expect "major disruptions, widespread droughts and floods," Kevin Trenberth, distinguished senior scientist at the National Center for Atmospheric Research in Boulder, Colorado. In principle, with advance warning, El Nino can be managed and prepared for, "but without that knowledge, all kinds of mayhem will let loose."

In the simplest terms, an El Nino pattern is a warming of the equatorial Pacific caused by a weakening of the trade winds that normally push sun-warmed waters to the west. This triggers a reaction from the atmosphere above.

Its name traces back hundreds of years to the coast of Peru, where fishermen noticed the Pacific Ocean sometimes warmed in late December, around Christmas, and coincided with changes in fish populations. They named it El Nino after the infant Jesus Christ. Today meteorologists call it the El Nino Southern Oscillation.

The last time there was an El Nino of similar magnitude to the current one, the record-setting event of 1997-1998, floods, fires, droughts and other calamities killed at least 30,000 people and caused $100 billion in damage, Trenberth estimates. Another powerful El Nino, in 1918-19, sank India into a brutal drought and probably contributed to the global flu pandemic, according to a study by the Climate Program Office of the National Oceanic and Atmospheric Administration.

As the Peruvian fishermen recognized in the 1600s, El Nino events tend to peak as summer comes to the Southern Hemisphere. The impact can be broken down into several categories. Coastal regions from Alaska to the Pacific Northwest in the U.S., as well as Japan, Korea and China may all have warmer winters. The southern U.S., parts of east Africa and western South America can get more rain, while drier conditions prevail across much of the western Pacific and parts of Brazil.

During the first full week of October, temperatures across a portion of the central Pacific most watched by researchers reached 2.4 Celsius (4.3 Fahrenheit) above normal, the U.S. Climate Prediction Center said. The threshold at which the Australian Bureau of Meteorology considers an El Nino under way is 0.8 degree Celsius, said Andrew Watkins, supervisor of Climate Prediction Services for the agency.

While the effect on the U.S. may not reach a crescendo until February, much of the rest of the world is already feeling the impact, Trenberth said.

"It probably sits at No. 2 in terms of how strong this event is, but we won't be able to rank it until it peaks out and ends," said Mike Halpert, deputy director of the Climate Prediction Center in College Park, Maryland.

"We are definitely hurt by the El Nino," said Mai Ky Van, deputy director at October Coffee-Cocoa One Member Ltd., a state-owned plantation company in Vietnam's Dak Lak province. The water level in reservoirs there is down about 67 percent from normal, and while there is enough for the current harvest, "I'm afraid we won't have enough water for irrigation in the next growing cycle," Van said.

In addition, fires burning in rain forests in Sumatra, Borneo and New Guinea, many of them set to clear land, have pushed air quality in Singapore to unhealthy levels, and the lack of rain resulting from El Nino is making the situation worse, said Robert Field, an associate research scientist at the NASA Goddard Institute for Space Studies at New York's Columbia University.

While much is made of the negative side of El Nino, the phenomenon is more complex.

"It will be a feast-or-famine climate pattern," said Scott Yuknis, president of Climate Impact Co. in Plymouth, Massachusetts. "Some crops will suffer too much rain and other regions will be hot and dry. The timing of the peak in this El Nino and how quickly it weakens will also determine the final crop impact."

A drought in Kenya may cut tea production by 10 percent. However, El Nino-spurred rains may end up boosting next year's harvest, Lerner said.

As the atmosphere changes, storm tracks in the U.S., for instance, are pushed down from the north, so the region from California to Florida could get more rain. This is reflected in the latest three-month outlook from the Climate Prediction Center, which sees high odds that heavy rain will sweep from California into the mid-Atlantic states through January. Texas and Florida have the greatest chance for downpours.

While this isn't likely to end California's four-year drought, it would improve conditions. Eliminating the dryness completely will be difficult because the state is so far behind on its normal rainfall.

"If the wettest year were to occur, we still wouldn't erase the deficit we have seen in the last four years," said Alan Haynes, service coordination hydrologist at the California Nevada River Forecast Center in Sacramento.

A lot of rain in Florida could exacerbate orange crop damage from citrus-greening disease, as the psyllid that carries it thrives on moisture, Lerner said. Production will shrink to a 52-year low in the season to Sept. 30 next year, according to the U.S. Department of Agriculture.

Cold-water species of fish will move north or into deep water, while others will disperse, NOAA said. This in turn can hurt birds that feed off those fish, causing many to die of starvation or fly far from their usual territories, said Andrew Farnsworth, researcher at Cornell University's Lab of Ornithology in Ithaca, New York.

"In broadest terms, though, we have had 26 past El Nino events since 1900, of which 17 resulted in widespread drought, so we in Australia have to manage for drought in any El Nino event," Watkins said.

The weather in Australia is also affected by how warm the Indian Ocean gets, which can lead to rainier conditions. Right now, that ocean, like the Pacific, is warm; however, all the other signals point the other way.

"The drys are winning out over the wet," Watkins said.

Another aspect of El Nino's scope that would seem positive at first is that there are typically fewer tropical cyclones, the class of storm that includes hurricanes and typhoons, making landfall in Australia during years the phenomenon is active.

"But there is a downside to that -- inland tropical areas get some of their best rainfall from ex-tropical cyclones that cross the coast and head inland as tropical depressions," Watkins said.

This would have been a benefit for places such as western Queensland, which like California is in the midst of drought.

The Atlantic Ocean also sees fewer tropical systems because of El Nino. Wind shear increases across the basin, tearing at the structure of storms and keeping their number down. While the Atlantic has produced two killer storms this year, the total number of hurricanes and tropical storms has been below the seasonal average.

Trenberth said he hopes all the warning helped people prepare for this El Nino. Planning could help agricultural economies weather the event better than the El Ninos in 1982-83 and 1997-98, perhaps leading to more water being captured for future use and prevent deaths.

"The general thing about these things is, if you are prepared, it doesn't have to be a negative," Trenberth said. "One of the biggest challenges that may not be to individuals but to organizations is water and water management. Can you save that water and manage that water so that, when it stops, you can still use it?"