A Horse Helped Her To Safety During Australia Bushfire, She's Her "Hero"

Winter, her son Riley, and a cousin had been monitoring the bushfires near the town about 250 km (156 miles) south of Sydney when they decided to evacuate on New Year's Eve. 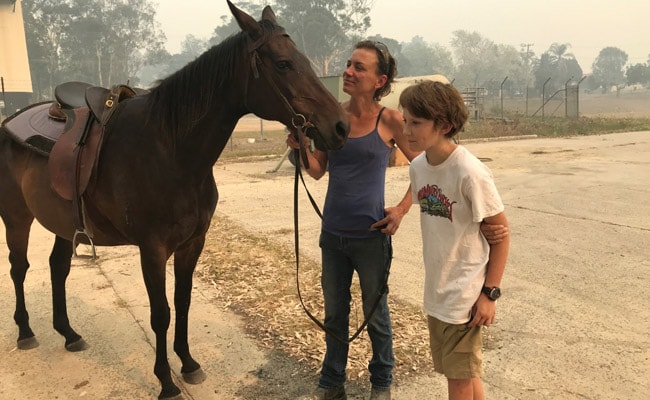 Bec Winter stands next to her son, Riley, and her horse Charmer

Choking smoke from raging bushfires blocked Bec Winter's path to safety but she put faith in her horse Charmer to find a way, eventually reaching refuge in a local pub in the coastal town of Moruya, Winter said on Saturday.

Winter, her son Riley, and a cousin had been monitoring the bushfires near the town about 250 km (156 miles) south of Sydney when they decided to evacuate on New Year's Eve.

"I didn't know whether we were riding into the fire or exactly where it was because we couldn't get updates. I just knew that it was extremely smoky," she said.

"I could feel heat and I don't know whether that was from the sun or... the fire... it was terrifying. But, I had so much faith in Charmer to get me out safely and she did that. She's my hero."

Australia's unprecedented bushfire season this year began earlier than usual and has burned more then 5 million hectares (12.4 million acres) since September. So far 23 people are confirmed dead, as the country battens down for worsening fire conditions on Saturday.

Winter regrouped with her family members, who made it to the beach safely. But, returning to check whether her rental property had survived the blazes, she found destruction of a different kind.

"Well, home's still standing but when we went back yesterday, all of our belongings have been thrown everywhere," she said.

"Riley's new bike he got for Christmas, stolen. The house is totally ransacked. Absolutely destroyed."

Police in the state of New South Wales (NSW) have stepped up patrols after reports of thefts from homes left vacant by people forced to evacuate.

"With thousands of lives and homes at risk today, I can't comprehend the type of person who'd think it's okay to try and profit or benefit at other people's expense," NSW Police Force Deputy Commissioner Gary Worboys said in a statement.

They advertised the pub's large grass paddock on social media as a respite for horses and other animals impacted by the fires. They have offered Winter and her son a free room and food.

"A local town is going to go through pretty tough times because people have lost their houses and lives been lost ... it's tough time for all," Mark Ethell said.