Police used tear gas after some protesters threw Molotov cocktails and bricks and others tore up "smart" lamp posts equipped with surveillance cameras. Other demonstrators had set up roadblocks with bamboo scaffolding. 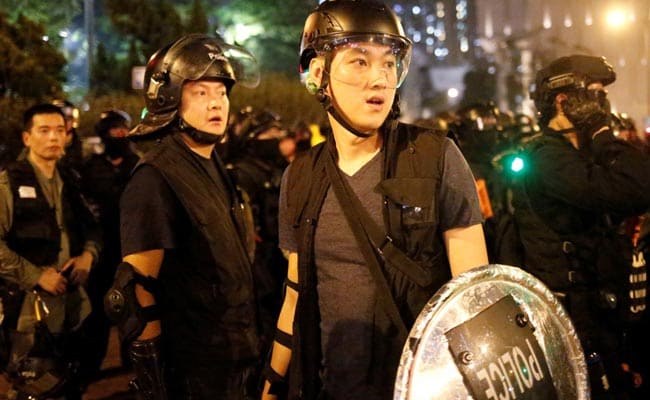 It was the first use of tear gas in more than a week after a series of mostly peaceful demonstrations.

Hong Kong police arrested 29 people after clashes overnight in which volleys of tear gas were fired to disperse anti-government protesters, they said on Sunday, as thousands regrouped in the west of the Chinese-ruled city in pouring rain.

Rail operator MTR Corp suspended some services to try to prevent people gathering but protesters made it to a sports stadium in the vast container port of Kwai Chung, where they marched around the running track and took shelter in the stands.

"It's very unreasonable that the MTR suspended the service. I am also mad that the police use excessive force against the protesters," said Jo Chan, 30. "Hong Kong people should not beat each other. I come because I support the five demands."

The protests, which started over a now-suspended extradition bill and evolved into demands for greater democracy, have rocked Hong Kong for three months and plunged the city into its biggest political crisis since its handover from British to Chinese rule in 1997.

The five demands are - withdraw the extradition bill, set up an independent inquiry into the protests and perceived police brutality, stop describing the protests as "rioting", waive charges against those arrested and resume political reform.

The wider calls for democracy pose a direct challenge for Communist Party leaders in Beijing, who are eager to quell the protests ahead of the 70th anniversary of the founding of the People's Republic of China on Oct. 1.

Beijing has sent a clear warning that forceful intervention is possible, with paramilitary forces holding drills just over the border.

Activists threw petrol bombs and bricks on Saturday in the gritty industrial district of Kwun Tong, on the east of the Kowloon peninsula.

Police used tear gas after some protesters threw Molotov cocktails and bricks and others tore up "smart" lamp posts equipped with surveillance cameras. Other demonstrators had set up roadblocks with bamboo scaffolding.

It was the first use of tear gas in more than a week after a series of mostly peaceful demonstrations in the former British colony.

Transport to the airport appeared normal on Sunday, despite protesters' plans for a day-long "stress test" of transport in the international aviation and financial hub.

The protest movement still appears to have broad support, with thousands, including families, lawyers, accountants and young and old people, taking to the streets.

They say they are fighting the erosion of the "one country, two systems" arrangement that enshrines the high degree of autonomy promised to Hong Kong at the handover.

Police said in a statement on Sunday they strongly condemned protesters "breaching public peace" and that 19 men and 10 women had been arrested. More than 700 have been arrested since the demonstrations began in June.

The neighbouring gambling territory of Macau, a former Portuguese colony that returned to Chinese rule in 1999, elected former legislature head Ho Iat Seng as its leader on Sunday - the sole approved candidate.

Ho, who has deep ties to China, is expected to cement Beijing's control over the "special administrative region", the same status given to Hong Kong, and distance it from the unrest there.

(Except for the headline, this story has not been edited by NDTV staff and is published from a syndicated feed.)
Comments
Hong Kong PoliceHong Kong Protest