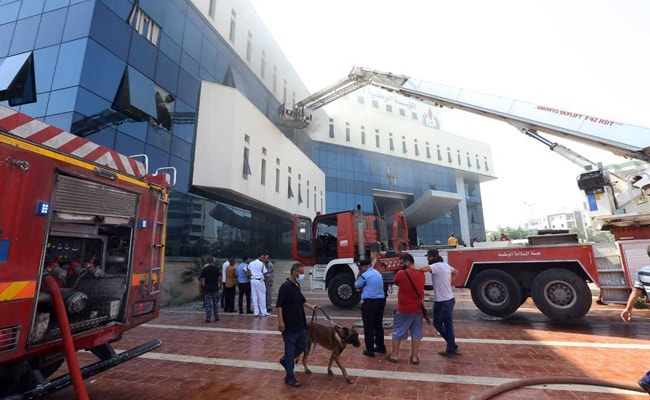 Armed men on Monday stormed the headquarters of Libya's National Oil Company in Tripoli killing at least two people, officials said, as witnesses spoke of hearing a blast and gunfire.

Witnesses said the building near the city centre had caught fire and was rapidly surrounded by security services, who evacuated its staff, including the NOC chairman Mustafa Sanallah.

Two people were killed and 10 wounded, the health ministry said. Sanallah confirmed to the Libya 218 news channel that staff members had been killed and others wounded, some of whom were in a "serious condition".

"The security services are looking for gunmen in the building, but our priority is to evacuate the civilians stuck inside," said Ahmed Ben Salem, a spokesman for the Deterrence Force, a militia that operates as Tripoli's police force.

"The situation is under control," he added.

He was not able to provide details on the identity of the attackers.

The Deterrence Force labelled the incident a "terrorist" attack and posted on its Facebook page photos it said showed the remains of suicide bombers.

An oil company official, who asked not to be named, said masked gunmen had exchanged fire with guards and attacked the firm's headquarters.

"I jumped out of the window with other colleagues, and then we heard an explosion," the official said.

No group has so far claimed the attack.

The attack on the NOC headquarters comes four months after suicide bombers struck the headquarters of Libya's electoral commission, killing 14 in an attack claimed by the Islamic State (IS) group.

The group overran Sirte, Kadhafi's hometown, 600 kilometres (370 miles) east of Tripoli, in 2015. IS was ousted by government forces and allied militias in December 2016, but has continued to carry out attacks.

Libya's vital oil sector has been repeatedly disrupted by violence since the 2011 NATO-backed rebellion that toppled Kadhafi, as two rival governments and a range of armed groups struggle for control of the country's resources.

The NOC was forced to suspend exports from all four of the country's key eastern terminals after military strongman Khalifa Haftar's self-styled Libyan National Army (LNA) regained full control of the region from a rival militia in June.

The NOC declared force majeure on oil loadings at the ports, a legal measure that frees parties to a contract from their obligations due to circumstances beyond their control.

The move added to supply worries on world markets at a time of rising crude oil prices.

But in July the NOC announced that production would resume at the Al-Hariga, Zweitina, Ras Lanuf and Al-Sidra ports, which are conduits for much of the country's crude and gas sales.

Petrochemical exports had accounted for some 95 percent of state revenues under Kadhafi's rule, with production at 1.6 million barrels per day.

But after his ouster, output fell to about 20 percent of that level, before recovering to more than one million barrels per day by the end of 2017.

Last week, the NOC announced plans to boost oil revenues by 80 percent to $23 billion, compared to from $13 billion in 2017.

Despite disruptions this year, its revenues from the start of the year to the end of July reached $13.6 billion, exceeding the total figure for 2017.