UK Prime Minister Boris Johnson has rejected harsher curbs in England over Christmas despite a record surge in cases driven by the Omicron variant. 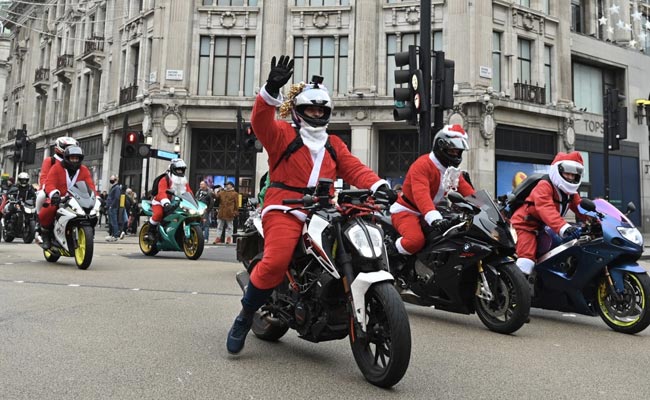 The UK PM has rejected harsher virus restrictions in England over Christmas. AFP

British Prime Minister Boris Johnson in his Christmas Eve message on Friday exhorted the UK public to get jabbed as a "wonderful" gift for the nation as cases soar.

Mr Johnson said that while little time remained to buy gifts, "there is still a wonderful thing you can give your family and the whole country... and that is to get that jab, whether it is your first or second, or your booster".

The UK prime minister has rejected harsher virus restrictions in England over Christmas despite a record surge in cases driven by the Omicron variant.

He has focused instead on a drive to offer booster jabs to all adults by the end of the year.

He acknowledged that "after two years of this pandemic, I can't say that we are through it", as the UK set a new record on Thursday of almost 120,000 cases in 24 hours.

Last year, Mr Johnson imposed a stay at home order on December 19 for London and southeast England that meant millions had to change Christmas plans.

This year he opted not to tighten rules, saying in his message that "for millions of families up and down the country, I hope and believe that this Christmas is, and will be, significantly better than the last".

People must test themselves before meeting vulnerable relatives, he cautioned, while encouraging them to enjoy a jolly family Christmas.

If the pile of wrapping paper is bigger than last year due to more family members attending, it's because of the vaccine rollout, he stressed.

He also said that getting a vaccine accorded with the teaching of Jesus Christ that "we should love our neighbours as we love ourselves".

Mr Johnson's popularity has been battered by reports of parties held by Downing Street and other government departments during lockdown periods, and his party lost a by-election in a previously safe seat this month.

Some within his own party have also revolted against the most recent Covid measures, particularly on mandatory showing of Covid passes to enter crowded venues such as nightclubs, which they see as violating personal freedoms.

Almost 100 Tory MPs opposed the measure, which was passed by parliament as a whole.

Mr Johnson's Brexit project is also still mired in wrangles over French fishing rights, a year after the UK reached an agreement with the European Union on a trade deal.