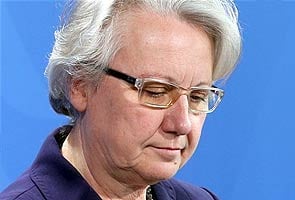 Berlin: Germany's education minister resigned Saturday after a university decided to withdraw her doctorate, finding that she plagiarized parts of her thesis - an embarrassment for Chancellor Angela Merkel's government as it prepares for elections later this year.

Merkel said she had accepted "only with a very heavy heart" the resignation of Annette Schavan, who has been her education and research minister since 2005 and was considered close to the chancellor.

Schavan's resignation comes only two years after then-Defense Minister Karl-Theodor zu Guttenberg lost his doctorate and quit when it emerged that he copied large parts of his doctoral thesis. Schavan said at the time she was "ashamed" of that affair.

On Tuesday, an academic panel at Duesseldorf's Heinrich Heine University voted to revoke Schavan's doctorate following a review of her 1980 thesis, which dealt with the formation of conscience. The review was undertaken after an anonymous blogger last year raised allegations of plagiarism, which the minister denies.

"I will not accept this decision and will file suit against it - I neither copied nor deceived in my dissertation," she told reporters, speaking alongside Merkel at a brief news conference. "The accusations, as I have said over the past weeks and months, hurt me deeply."

Schavan made clear that she was going to prevent the issue turning into a festering problem for her party, and the government, as Germany gears up for parliamentary elections on Sept. 22 in which the conservative Merkel will seek a third term.

Schavan, 57, a member of Merkel's Christian Democratic Union, announced her decision after returning from an official trip to South Africa during which, she said, she thought "thoroughly about the political consequences."

"If a research minister files a suit against a university, that of course places strain on my office, the ministry, the government and the CDU as well," she said. "And that is exactly what I want to avoid."

Merkel offered lengthy praise of Schavan's "exceptional" performance as a minister, adding that "at this time, she is putting her own personal well-being behind the common good."

Schavan will be replaced by Johanna Wanka, 61, the outgoing regional education minister in the state of Lower Saxony, Merkel said. That state's conservative-led government narrowly lost a regional election to the center-left opposition last month.

Despite the coalition government's setback in Lower Saxony, in northwestern Germany, polls show that Merkel remains popular with voters; her challenger from the center-left Social Democrats, Peer Steinbrueck, has struggled so far to gain traction.

Most recent polls show a majority neither for Merkel's current center-right coalition with the struggling pro-market Free Democrats nor for a rival combination of the Social Democrats and Greens.
They show Merkel's conservative Christian Democrats as the strongest single party. That suggests the chancellor may be able to carry on with a new coalition partner.

It's also unclear that the Schavan affair will provide much political ammunition for the opposition.

The usually low-profile minister's troubles over her 3-decade-old thesis have drawn a much more measured response from opponents than in the case of Guttenberg, a rising conservative star at the time he quit.

"It is tragic for Annette Schavan's political career to end this way, but the resignation is an act of political consistency," Social Democratic parliamentary chief whip Thomas Oppermann said.

"This year could not have started worse for Mrs. Merkel," he said.

The German Association of University Professors and Lecturers welcomed Schavan's decision to go.

Promoted
Listen to the latest songs, only on JioSaavn.com
Its chairman, Bernhard Kempen, said the resignation was "necessary and logical" since Schavan, although she is entitled to appeal, was damaged as a minister by the decision to revoke her doctorate.