The G4 nations, India, Brazil, Germany and Japan, have been calling for the reform of the UN Security Council, and support each others' bids for the permanent seats in the top UN body. 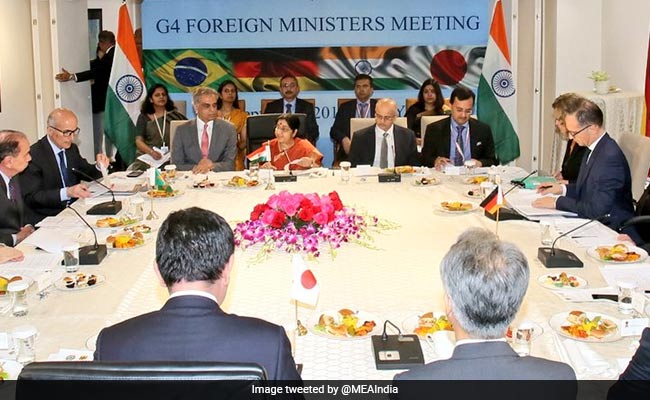 G4 nations - India, Brazil, Germany and Japan, have been demanding the reform of the UN Security Council

India and the G4 nations voiced concern over the lack of substantive progress in the long-pending Security Council reform, saying it is time to finally initiate text-based negotiations to safeguard the legitimacy and credibility of the powerful UN organ.

The G4 nations, India, Brazil, Germany and Japan, have been calling for the reform of the UN Security Council, and support each others' bids for the permanent seats in the top UN body.

External Affairs Minister Sushma Swaraj hosted her counterparts Aloysio Nunes Ferreira of Brazil, Heiko Maas of Germany and Taro Kono of Japan at a meeting of the G4 nations held on Tuesday at India's Permanent Mission to the UN on the margins of the 73rd session of the UN General Assembly.

In a joint statement after the meeting, the four nations reaffirmed their commitment to multi-lateralism.

"It was time to finally initiate text-based negotiations during the 73rd session of the General Assembly" in line with the standard operating procedures of the UN General Assembly, the ministers said.

They stressed that adapting the United Nations to the contemporary needs of the 21st century necessarily required reforming the Security Council.

"They stressed the need to safeguard the legitimacy and credibility of this UN organ which deals with international peace and security," the statement said.

The G4 Ministers reaffirmed the need for an early reform of the Council including the expansion of both the permanent and non-permanent categories of membership to enhance its legitimacy, effectiveness and representation.

They said that the current composition of the 15-nation Council does not reflect the changed global realities and stressed that the UN Security Council reform is essential to address today's complex challenges.

The ministers reiterated their support for Africa's representation in both categories of membership in a reformed and expanded Security Council.

"As aspiring new permanent members of a reformed Council, the ministers reiterated their commitment to work to strengthen the functioning of the UN and the global multilateral order as well as their support for each other's candidatures," it said.

Reviewing progress on the UN Security Council reform at the Intergovernmental Negotiations (IGN), they said substantial progress had not yet been achieved even though next year would mark 40 years since the inscription of the item 'Question of equitable representation on and increase in the membership of the Security Council and other matters related to the Security Council' on the agenda of the General Assembly.

The four leaders welcomed the commitment of President of the 73rd session of the General Assembly Maria Fernanda Espinosa Garces to the reform process and expressed their readiness to extend full support to her with a view to launching negotiations based on a text comprising all positions and proposals by the member states.

The ministers agreed that all aspects of the comprehensive reform had been thoroughly discussed several times in the IGN and the General Assembly.

They reiterated their commitment to working with other member states to realise the shared vision of the overwhelming majority supporting the initiation of text-based negotiations in a democratic and transparent manner.

The G4 will intensify dialogue with other member states, especially like-minded countries and groups to achieve meaningful progress in the upcoming IGN session, the four ministers said, adding that they are determined to redouble their efforts towards securing concrete outcomes on the UN Security Council reform during the current session of the General Assembly.