The outbreak was first reported on Monday but at the time it was unclear what strain of the virus it was. 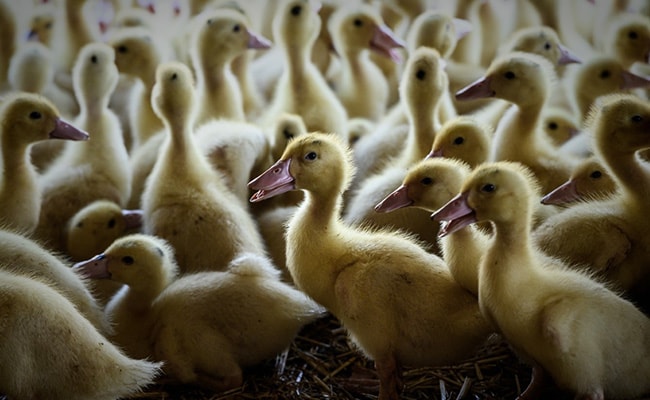 Bird flu has been spreading rapidly in Europe. (Representational)

The French farm ministry said on Tuesday that highly pathogenic H5N8 bird flu had been found on a duck farm in the southwest of the country, confirming France's first farm outbreak of the virus this year.

The outbreak was first reported on Monday but at the time it was unclear what strain of the virus it was.

Bird flu has been spreading rapidly in Europe, putting the poultry industry on alert after previous outbreaks led to the culling of tens of millions of birds.

"The ANSES national reference laboratory confirmed today the infection of a farm of 6,000 ducks by the H5N8 virus in the municipality of Benesse-Maremne (Landes region), in which high mortality was observed on Dec. 5," the ministry said in a statement.

A security zone was set up around the farm on Dec. 7, implying extra monitoring, a ban on the move of poultry and additional sanitary measures, the ministry said, adding that all the ducks on the farm were culled.

France has already detected the H5N8 virus on birds sold in three pet stores. Investigations found that the wild birds had been sold by the same person in northern France, the agriculture ministry said last week.

In addition, three wild swans and one wild goose found dead last week have also been confirmed as carrying the H5N8 virus, the ministry said.

The spread of the virus in Europe prompted France to raise its bird flu security alert to "high" in early November, which requires keeping birds indoors or installing protective netting to prevent contact with wild birds that spread the disease.

The ministry stressed that bird flu cannot be passed through the eating of poultry products.

The H5N8 virus has never been detected in humans.