Manatee County officials on Saturday ordered people in more than 300 homes to urgently evacuate the area around an old phosphate plant at Piney Point, where officials described a deteriorating leak in one of the reservoir containment walls. 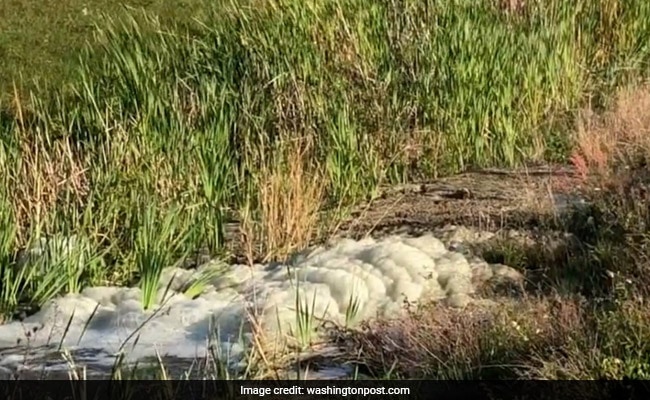 Officials said crews have been pumping water out of the reservoir.

Florida officials were scrambling Sunday to prevent a "catastrophic flood" after the lining in a reservoir holding hundreds of millions of gallons of wastewater sprung a leak. They warned that the breached reservoir's total collapse could send a 20-foot wall of contaminated water crashing down into the surrounding area.

Manatee County officials on Saturday ordered people in more than 300 homes to urgently evacuate the area around an old phosphate plant at Piney Point, where officials described a deteriorating leak in one of the reservoir containment walls.

"If you're in an evacuation area and you have not heeded that, you need to think twice and follow the orders," acting Manatee County administrator Scott Hopes warned.

As state and local authorities warned of potential flooding, scientists expressed concern about longer-term consequences, including whether the leaking water could drive algae blooms that could be fatal to marine life.

"What we're looking at now is trying to prevent - and respond to if need be - a catastrophic flood issue," said Florida Gov. Ron DeSantis, a Republican, who declared a state of emergency on Saturday for affected counties.

Officials said crews have been pumping water out of the reservoir, a controlled discharge into surrounding waterways that is meant to lower the reservoir's volume and reduce water pressure in the event of a total failure.

More than 23,500 gallons per minute - more than 33 million gallons of water per day - were being pumped out of the pond, DeSantis said during a Sunday news conference. He said the Florida National Guard was flying in additional pumps to accelerate the process.

Hopes said that the controlled release of water is "working" and that, with the additional pumps, officials anticipate being able to double the amount of water they are discharging, but "we are not out of the critical area yet."

Officials said Sunday that about 300 million gallons of wastewater remain in the reservoir.

The EPA is also sending an "on-scene coordinator" to work with the local emergency management agencies and "coordinate EPA support, as necessary," Jenkins said.

The Piney Point site was in operation starting in the 1960s, launched by Borden Chemical to process phosphate, a component in fertilizer, the Bradenton Herald reported. It has been inactive since 2001.

But the area, now managed by a private company called HRK Holdings, still contains contaminated material left from its years in operation. HRK Holdings could not be reached for comment; a company voice mail box was full, and an online contact form was not working Sunday.

In the process of turning phosphate into fertilizer, phosphogypsum - a slurry mixture that contains uranium and is slightly radioactive - is left as a byproduct, said Matthew Pasek, a geoscience professor at the University of South Florida.

"As a result, there's lots of this waste product that is left over," he said. "And you can't do anything with it."

To manage that waste product, the phosphogypsum is put into mountainous waste piles called gypsum stacks. Ponds of phosphorous-rich wastewater sit on top of them. Such stacks are common in Florida, a major hub for the phosphate mining industry dating to the late 1800s, Pasek said.

DeSantis said the wastewater being discharged into surrounding waterways is "not radioactive." Pasek said that is true in the sense that it cannot penetrate skin and would not hurt people if splashed onto them. But he added that it is "slightly" radioactive and, on a long-term basis, "you wouldn't want to drink this water."

"The goal is a controlled discharge to the Port of Manatee . . . that marine environment can better process that," Valenstein said.

Pasek said the worst-case scenario is that the reservoir ruptures and disrupts other Piney Point pools that are not as treated. Another threat is the potential for algae blooms in the Tampa Bay and the gulf if the wastewater spills in.

Jayne Gardiner, a marine biologist and associate professor of biology at New College of Florida, said one concern is "potentially just a huge load of nutrients coming into the system."

"Adding that much nitrogen to a system at once tends to fuel absolutely massive algae blooms - that's problematic on a number of levels," Gardiner said. She said that algae blooms tend to form large clumps that can block light and that the blooms consume oxygen.

"When you have a massive bloom, you can get very low oxygen levels overnight, and that can be fatal for organisms that are breathing water," she said.

Gardiner recalled Florida's red-tide event in 2018, the state's worst red tide in more than a decade, which killed many marine animals.

"I don't think anybody could forget what it looked like, what it smelled like - it was incredible," she said.

"It's hard to have a crystal ball and say this is what it's going to look like," she added. "Except we do know, history has told us again and again, that this much nutrient loading into a system is generally pretty disastrous."

Hopes acknowledged Sunday that concerns about the site require a long-term solution.

Pasek said the Piney Point situation could be a "wake-up call," noting that there are many similar phosphogypsum stacks in Florida.

"This is the problem with mining in general," he said. "We like the products, but when the companies that mine this stuff go out of business, who owns the waste products? And that is an excellent question."

Pasek added: "Who has to pay for maintenance is also the big question."