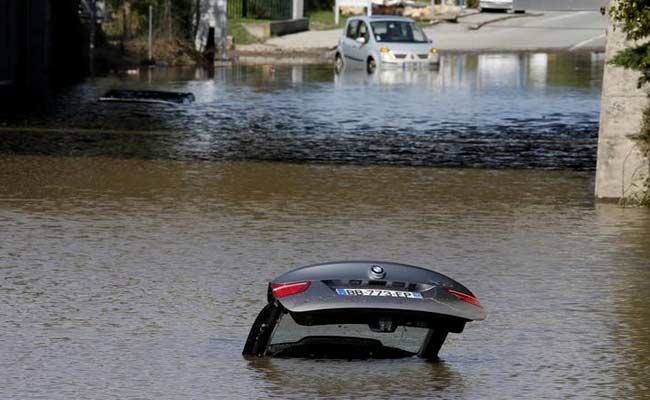 An abandoned car is submerged in deep water near by an underpass after flooding caused by torrential rain in Cannes, France. Reuters

Cannes: The mayor of France's glitzy Cannes resort appealed to the world's movie and music stars today to help rebuild the town after it was hit by deadly floods earlier this month.

David Lisnard said he would email famous supporters of the town, which hosts the world's leading film festival each summer, as well as a range of entertainment industry events.

"I will send emails to our big patrons, to Sharon Stone, to producers, to all the presidents of the Cannes Festival jury, to find ways to finance the reconstruction of the town," he told Le Parisien newspaper.

Ms Stone is an ambassador of aids charity amfAR, which hosts a high-profile gala at the film festival.

"I will send them an online video in English showing the level of destruction. I'm making this request for funds because we risk suffering a real financial and social disaster," he added.

Violent storms and flooding along the French Riviera killed at least 20 people at the start of October in what were described as "apocalyptic" scenes.

Up to seven inches of rain fell in just three hours overnight, transforming the glamourous streets of Cannes, Nice and Antibes into debris-strewn rivers and carrying several cars off to sea.

"Cannes was the worst hit of all, accounting for 40 percent of the damage," said Lisnard.

He said 400 businesses were hit, and that the town hall had a reconstruction bill of some 45 million euros ($50 million).

"It's imperative that tourism continues because it's half our income and our main source of employment," he added.