Fire At Pennsylvania Daycare In US Kills Five Children

Erie fire chief Guy Santone said the children, who ranged in age from eight months to seven years, were sleeping in second floor bedrooms when the blaze broke out early Sunday. 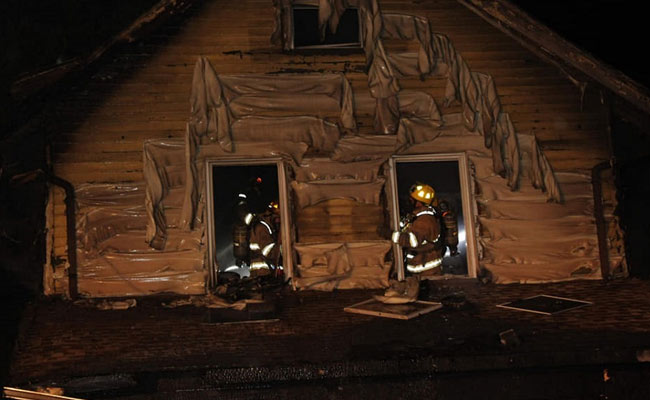 Firefighters work to put out a house fire in Erie, Pennsylvania. (AFP)

Authorities on Monday were investigating the cause of a fire that swept through a home daycare in Erie, Pennsylvania, killing five children trapped inside.

Erie fire chief Guy Santone said the children, who ranged in age from eight months to seven years, were sleeping in second floor bedrooms when the blaze broke out early Sunday.

He said firefighters arrived on the scene about 25 minutes later, and found "heavy fire coming out of all the windows on the first floor, and reports were in that there were children trapped on the second floor.

"So firefighters, obviously, they started attacking the fire, but another group of firefighters laddered the side of the building and got up into the bedrooms," Santone told local ABC News affiliate Jet24.

"We were able to rescue, or pull out, the five younger children, but unfortunately they all passed away," he said.

The woman who operated the daycare in her house, Elaine Harris, ran through the fire, and tried to drive herself to the hospital but crashed on the way, he said. She was flown to Pittsburgh for treatment.

Santone told the New York Times that one of the victims was Harris's child and the other four were siblings, possibly left overnight by parents who worked night shifts.

Santone said investigators were "leaning toward an electrical fire" as the cause of the blaze but had not yet concluded their probe.

He said investigators had found only a single smoke detector in the house, and that was in the attic.

(Except for the headline, this story has not been edited by NDTV staff and is published from a syndicated feed.)
Comments
US DaycarePennsylvaniachildren