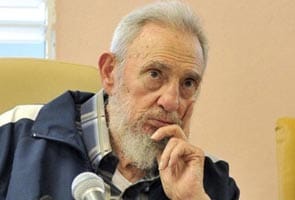 Havana: Fidel Castro turns 87 today, largely out of sight but not out of mind, as Cuba struggles to move on from his half-century rule and as many of his policies are reconsidered under the leadership of his younger brother Raul.

The birthday of one of Latin America's most iconic revolutionary figures has been a low key celebration in recent years. A choral concert in his honor at the Jose Marti national monument in Havana on Monday evening was the only official event planned.

Castro goes about his daily activities out of the public eye, and how much influence the retired commandante still wields is unknown. He emerges every once in a while to reassure his followers that he is very much around, frustrating those who wish he was not.

"No one believes anymore that Fidel has any real influence over day-to-day policy," a western diplomat said, "but that doesn't mean he is never consulted on big questions or that when he comes out it isn't important."

The government has staged just three media events this year for Castro: first, to vote in January for National Assembly deputies and chat with local reporters; then, in February, to attend the new parliament's opening session where his brother's possible successor, 53-year-old Miguel Diaz-Canel, was named first vice president, and more recently, to inaugurate a school near his home on the outskirts of Havana.

Photos of a frail-looking Castro meeting with visiting dignitaries are occasionally published, as well as some of his writings, though far fewer than his once frequent "Reflections," on global topics.

The once-towering, broad-shouldered man is now stooped. He has trouble walking, and his famed booming oratory has softened to a near whisper. It is a transformation which brought tears to two women interviewed for this story.

Castro, now referred to as "the historic leader of the revolution," lives in a modest home on the western outskirts of Havana with his wife, Dalia Soto del Valle, near his sons and grandchildren, and where he studies, writes and receives visitors.

Cubans who have seen Fidel up close on one of his occasional ventures away from home report he remains lucid and in relatively good shape for a man who was at death's door in 2006 after undergoing repeated abdominal surgeries and reportedly having part of his colon removed.

"He was old, but the same old Fidel, asking questions, citing statistics from last year and before, shuffling around, chuckling and talking with everyone," said a worker at the Empresa Genetica Pecuaria Los Naranjos in Atemisa province, around 30 miles (48 km) west of Havana. "His mind was still amazing," he said.

The worker, who asked that his name not be used, said Castro on April 26 paid a surprise two-hour visit to the company, which raises and improves livestock such as goats, turkeys and buffalo.

"He showed up in a caravan of at least 10 vehicles, including two vans and an ambulance, and accompanied by his wife, one of his sons, numerous military-clad bodyguards and other people," he said.

"Fidel is Fidel and he continues experimenting in the countryside," said a farmer in central Camaguey who asked that he not be identified.

82-year-old Raul Castro has governed the Caribbean island since his brother became ill.

He is presiding over a sweeping plan to move the bankrupt Soviet-style economy in a less paternalistic and more market-friendly direction, like those of Vietnam and China. He has loosened regulations on travel and the buying and selling of personal property and broadened other personal freedoms, while preserving Cuba's one-party communist system.

Raul Castro rarely speaks in public, and when he does it is invariably for less than 45 minutes, a dramatic change from the hours-long oratory of Fidel Castro. Cubans expressed mixed feelings about this difference between the brothers.

"What do I miss? The constant guidance of Fidel in the face of any eventuality," said Pedro Gonzales, a Santiago de Cuba retiree.

Promoted
Listen to the latest songs, only on JioSaavn.com
Havana housewife Luisa, who declined to give her last name, was less kind, saying that reforms under Raul had done little to improve her life and had created "uncertainty among the people." She said his inability to communicate left her feeling like "I'm on a boat without a captain."

Christopher Sabatini, senior director of policy at the Americas Society and Council of the Americas, said Fidel Castro had transitioned from policy making to "a symbolic role as the protector of the revolution's integrity," in order to allay public unease, which inevitably accompanies both a leadership and economic transition in a country like Cuba.
© Thomson Reuters 2013