Edward Snowden, who now lives in Russia, was charged in June 2013 in the United States with espionage and stealing state secrets. 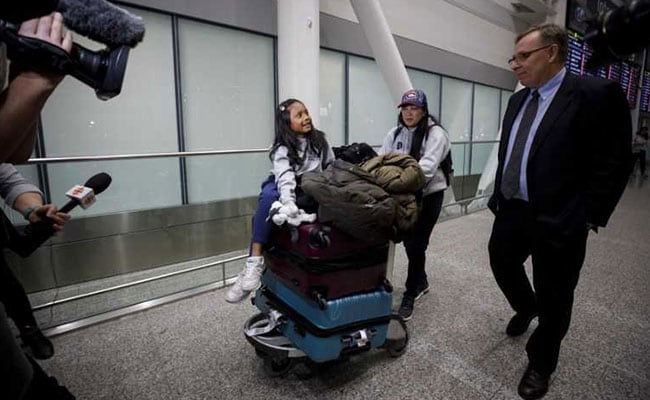 Vanessa Rodel and her 7-year-old daughter Keana of Philippines made the plea on "humanitarian grounds".

A lawyer for a family who sheltered fugitive former US National Security Agency contractor Edward Snowden asked Canada on Wednesday to take them in as refugees, saying they were being persecuted in Hong Kong.

Guillaume Cliche-Rivard of the non-governmental group For the Refugees, which in March sponsored two other Snowden "Guardian Angels" -- Vanessa Rodel and her seven-year-old daughter Keana of the Philippines -- made the plea on "humanitarian grounds" at a press conference.

He noted growing concerns about civil rights abuses since mainland China took control of the former British colonial enclave in 1997.

"The fact that Germany has granted refugee status to these people shows that Hong Kong is a persecutor within the meaning of the Geneva Convention," he said.

Germany's decision "adds a lot of weight and credibility" to the family's amended refugee claim, he said.

Originally from Sri Lanka, Supun Kellapatha and Nadeeka Paththini and their two young children are facing deportation after their initial refugee claims in Hong Kong were rejected.

"My daughter should not be growing up in Canada without her father, and her half-sister and her half-brother," Rodel said.

"My family has been divided and I ask Canada to act now to bring the family all together."

Sri Lankan army deserter Ajit Kumara is also part of the group that assisted Snowden but is awaiting a decision by Hong Kong on whether he can travel.

The group hid Snowden in their tiny Hong Kong apartments in 2013 when he was on the run after stealing a trove of highly classified NSA documents.

The documents revealed the existence of global surveillance programs run by the NSA in cooperation with partners Australia, Britain and Canada.

Snowden, who now lives in Russia, was charged in June 2013 in the United States with espionage and stealing state secrets.

(This story has not been edited by NDTV staff and is auto-generated from a syndicated feed.)
Comments
Edward SnowdenEdward Snowden asylumVanessa Rodel