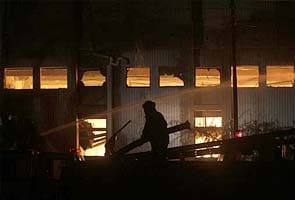 Karachi: At the only morgue in Pakistan's largest city lie the blackened remains of 32 people killed in one of the worst industrial accidents in the country's history, wrapped in white plastic body bags waiting for DNA tests to determine who they are.

That means an excruciating wait, so far more than a month for families whose relatives are believed to have been killed but have not been accounted for.

One of those in the morgue may be the daughter-in-law of Aisha Bano. Bano's son and his wife both were working as stitching machine operators in the warehouse-factory producing jeans and other clothes when it was ravaged by a Sept. 11 blaze. The son is known to have died. His wife is still missing.

Bano says her grandchildren have continuous nightmares about their missing mother, dreaming that she's trying to get home.

"Almost every midnight one of them wakes me up to tell me somebody is outside the house calling their names and pleading to open the door," said Bano, tears rolling down her cheeks.

The fire horrified Karachi, and residents are still struggling to deal with the extent of the tragedy. According to official figures, 259 workers died in the fire, but there are indications the toll may be even higher. The inferno laid bare the dangerous conditions at some Pakistani factories, as well as the limitations of facilities in this port city of more than 18 million people.

It took rescue workers more than 36 hours to put out the blaze. Investigators haven't determined what caused the fire but suggested that it might have been a short circuit that ignited material and wood. Between 300 and 400 workers were inside working. An investigation found that the emergency exits were permanently locked, and the main doors were locked after the fire broke out to prevent theft.

Many of the dead suffocated to death in the basement when it filled with smoke. Those on the top floors of the five-story building could be seen on television images desperately breaking through the metal bars blocking the windows and then jumping to the ground below.

When authorities were finally able to make their way into the blackened building, they found dozens of bodies, many charred beyond recognition.

Most of the dead have been identified and handed over to their families, many in the first couple of days because the bodies were intact.

Those remaining are at the Edhi Morgue, identifiable only by DNA.

There's no place in Karachi to do the DNA tests, so samples have been sent to a laboratory in Islamabad, said officials. Despite reassurances from the government that the dead would be quickly identified, the turnover has been slow. The lab provided results on nine bodies so far, leaving 32 still at the morgue, said Inspector Jahanzeb Khan with the Karachi police.

"We sent a lot of reminders to the laboratory to expedite the DNA match process," he said.

Bano's family received the body of her son, Muhammad Javed, from the hospital the day after the fire. But his wife Samina's has still not been identified. Bano and her other sons initially thought Samina might still be alive and visited all the city's hospitals. When realization struck that she was likely dead, they began visiting the morgue.

"We checked all the unidentified bodies so many times. We visited the Edhi Morgue 17 days in a row," she said, sitting next to her three grandchildren and younger son.

The doctors took a DNA sample from one of the relatives and told them it would take up to three days to confirm Samina's body, Bano said. When they contacted the police, they were told the samples were sent to Islamabad and were told to wait.

The lack of identification has also made it difficult for families to receive compensation promised by the government.

Muhammad Siddiq lost his son Muhammad Shehbaz in the factory. His son came home for lunch that day with a fever but he brushed aside his mother's urging to stay home and returned to work. Provincial government officials told the family they have to prove they have lost a family member before they can receive compensation. So they need confirmation of his body.

Siddiq said the compensation pales in comparison to the family's need to bury their son.

"All I need is my son's body so his soul can rest," he said. "His mother has almost lost her senses."

A recent survey by a Karachi union suggests even more people might have been killed.

The Hosiery Garment Textile Workers Union along with the Pakistan Institute of Labor Education and Research surveyed families in the neighborhood where the factory was located as well as another neighborhood nearby where many workers lived. They found 65 families who said they were still missing relatives after the blaze. Some of those could be among the unidentified at the morgue, but the numbers indicate many might not be.

"If they have died, the casualties are much higher than reported," said Rehana Yasmin from the union.

Two of the owners of Ali Enterprises, which owned the factory, are in a Karachi prison awaiting trial on murder charges for allegedly telling guards to lock the doors after the fire started to prevent theft. A third owner was allowed to stay out of jail because of poor health. Police have also arrested the factory's general manager and three private security guards on murder charges for carrying out the orders to lock the doors.

The Federal Investigation Agency (FIA), one of the country's highest law enforcement agencies, was tasked with investigating the fire and recently submitted a report blaming the owners and relevant government departments for not following safety and labor laws.

The second floor, where most of the casualties were reported, was not even in the approved map of the factory, the FIA found. Water hydrants did not work, and workers had not been given rescue training by the city's civil defense department, the FIA found. The factory was not registered with the provincial labor department, in violation of the country's labor laws.
Comments
Pakistan fire