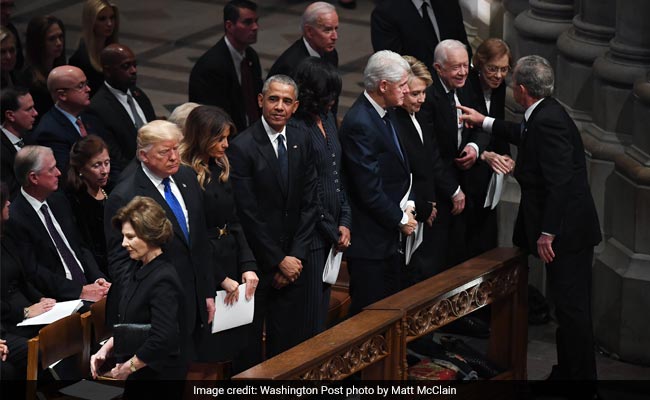 Former President George W. Bush with the former US Presidents.

The men who came to eulogize former President George H.W. Bush spoke of the 41st president and the American presidency on Wednesday in broad and magisterial terms.

He was "the last great soldier statesman" in the words of his biographer. A former Canadian prime minister recalled Bush as the leader of the "greatest democratic republic that God has ever placed on this earth."

But the words of praise for Bush seemed to contrast with a jarring reality: A generation after he left office,the presidency has become all-consuming in American life, yet it has also never seemed smaller and more prone to failure.

"The public interest in the presidency is sky high," said Douglas Brinkley, a presidential historian at Rice University. "But the institution of the president has shrunk. It's becoming a tawdry kind of thing."

Trump briefly shook hands with former President Barack Obama and his wife, Michelle. Beyond that exchange, the four presidents in the front row seemed incapable of even fleeting contact. Former President Bill Clinton glanced quickly in Trump's direction and then looked away. Rather than shake Trump's hand, former President Jimmy Carter checked his watch.

Trump, arms folded across his chest, stared stoically throughout, as traits of his predecessor, so different from his own, were praised.

Some of the contrast between then and now is a product of Trump and his divide and conquer kind of politics. In the cathedral, Bush eulogized his father as an "imperfect man" who left America as "a more perfect union."

More than most recent presidents, Bush's instincts at home drove him toward bipartisan compromise on issues as disparate as the budget and the environment. Overseas, he labored to build broad-based alliances. "He often said, 'When the really tough choices come, it's the country, not me . . . (the) country that I fought for,' " recalled former Sen. Alan Simpson, R-Wyo., a Bush friend for decades.

Today, American presidents have largely given up on such bipartisan sentiments, and cross-party compromises on anything of substance have become rare. Obama passed health care reform without any support from Republicans. Trump's tax bill passed without the benefit of a single Democrat's backing.

In speeches near the end of his term, Obama talked of trying to reach across America's growing divide - even if his efforts were sometimes disparaged by critics as halfhearted or insincere. "I have no doubt a president with the gifts of Lincoln or Roosevelt might have better bridged the divide," he said in his final State of the Union address. "(But) I guarantee I'll keep trying to be better so long as I hold this office."

Trump, in his rallies and speeches, has largely dispensed with even the appearance of trying, opting for a posture closer to all-out war with his political opponents. That has made it far easier for his opponents to dismiss him as not their president, and for the presidency itself to diminish in breadth.

But not all of the blame for the increasing smallness of the office sits with its current occupant. To many historians, the Trump presidency is a reflection of the larger problems with the country and the office.

"The modern presidency has gotten out of control," Leon Panetta, who served as Clinton's chief of staff and Obama's defense secretary, told the Atlantic magazine earlier this year. Presidents, he argued, are confronted by too many crises. Instead of solving big problems in the country, they are focused on dozens, if not hundreds, of disasters of the moment.

Others blame the seeming smallness of the office on the relative magnitude of the problems facing recent presidents. The wars in Iraq and Afghanistan has spanned an unheard-of three presidencies, with no end in sight. And then there's global warming, which some Democratic presidents have described as an existential threat, only to be dismissed by Republicans who call it a hoax or junk science.

"How does a president appear magisterial on a topic like global warming?" said Jeremi Suri, author of "The Impossible Presidency" and a historian at the University of Texas at Austin. "The problem is so big, and the president has so little control."

On Wednesday, Bush's eulogy described him as a man ennobled by sacrifice on behalf of his country - a man who campaigned fiercely at times but sought to be a president for all Americans.

"George Herbert Walker Bush, who survived that fiery fall into the waters of the Pacific three-quarters of a century ago, made our lives and the lives of nations freer, better, warmer and nobler," historian Jon Meacham said in his eulogy. "That was his mission. That was his heartbeat."

Today, presidents face a far more divided landscape than Bush would've ever conceived possible. Today, Clinton's tough-on-crime stance and embrace of free trade have made him increasingly unpopular within his party, which has shifted to the left. Bush's focus on environmental protection, global alliances and extending protections to Americans with disabilities would get him disowned in today's Republican Party.

The absence of voters in the middle have made it almost impossible for presidents to break through the gridlock on any issue of substance. "Presidents are playing a game of speaking to empowered groups and not to the public interest," Suri said.

On Wednesday, though, mourners came to celebrate a different vision of the presidency, reflecting a different era in American politics. The Bush they lauded was not just a leader but a model for the entire country.

Meacham described Bush as a "20th century founding father" in the mold of America's greatest presidents who "believed in causes larger than themselves."

The Rev. Russell Jones Levenson Jr., who had been Bush's pastor at St. Martin's Episcopal Church in Houston, acknowledged that some were describing Bush's death as the "end of an era."

In his homily, Levenson argued against that formulation. "Perhaps it's an invitation to fill the hole that has been left behind," he suggested.

And with that, the former presidents walked out of the cathedral and back into a bitterly divided country.