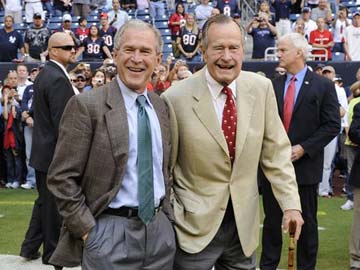 "George H.W. Bush is a great servant, statesman, and father," George W. Bush said in a statement issued by Crown. "I loved writing the story of his life, and I hope others enjoy reading it."

According to Crown, the book will cover the elder Bush's whole life and his influence on his son, from George W.'s "childhood in West Texas to his early campaign trips with his father, and from his decision to go into politics to his own two-term presidency."

The book will be "heartfelt, intimate, and illuminating," Crown publisher Maya Mavjee said in a statement.

"As the only father and son to each have served as President of the United States since John and John Quincy Adams, George H. W. Bush and George W. Bush occupy a unique position in history," Mavjee said. "George W. Bush brings to vivid life his unique perspective of the personal qualities and principles that have animated George H. W. Bush's extraordinary life of service to country and family."

The relationship between the two presidents has long fascinated scholars, political insiders and the general public. Many have speculated that the younger Bush felt competitive with his father, driven to surpass him and to gain his approval. In a 2013 appearance on "CBS This Morning," George W. Bush said his father was a role model and that their relationship was based upon "love and admiration."

George W. Bush first thought of the book around 2010 and began writing it two years later, consulting widely with friends and family members, including his father. The book is expected to be around 300 pages and Crown is planning a first printing of 1 million copies. Although Bush had assistance with research, he wrote the book himself.

Promoted
Listen to the latest songs, only on JioSaavn.com
George H.W. Bush, who turned 90 in June, was defeated for re-election in 1992 by Bill Clinton, but his stature has steadily grown. In 2012, he was the subject of an admiring HBO documentary, "41," referring to his being the 41st president. Jon Meacham, a Pulitzer Prize-winning biographer, is working on a book about Bush. "George H. W. Bush: Character at the Core," by former Bush speechwriter Curt Smith, is scheduled to come out this fall.

The elder Bush is one of the few presidents in modern times not to have written a memoir. His books include "All the Best: My Life in Letters and Other Writings" and "A World Transformed," a collaboration with former National Security Advisor Brent Scowcroft.