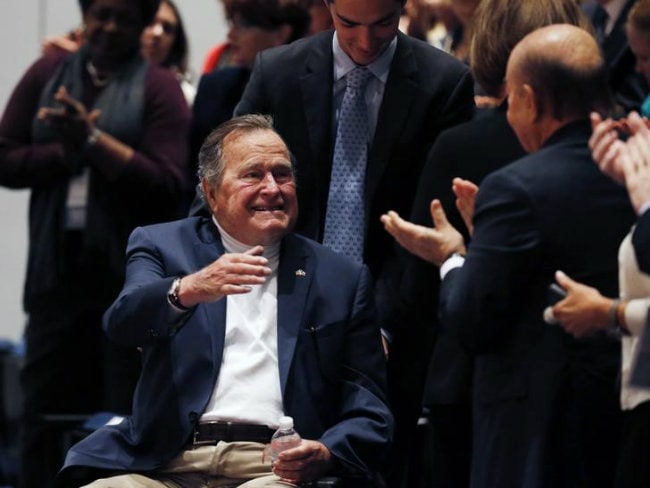 Former US President George H.W. Bush remained hospitalized on Thursday near his home in Houston after experiencing shortness of breath this week but was "doing well," his spokesman said.

Bush, 90, was taken by ambulance to Houston Methodist Hospital on Tuesday. Spokesman Jim McGrath said on Wednesday that the 41st president's prognosis was positive and that he remained hospitalized as a precaution.

"He is still in the hospital and still doing well," McGrath said on Thursday in an emailed statement.

The latest health scare comes two years after Bush, who was president from 1989 to 1993, was admitted to the same hospital for treatment of bronchitis and related ailments.

Bush spent seven weeks recuperating and became so ill he was believed at one point to be near death.

The former Republican president suffers from Parkinson's disease and cannot use his legs. But he celebrated his 90th birthday on June 12 by skydiving in Kennebunkport, Maine, with the Army's Golden Knight parachute team.

Promoted
Listen to the latest songs, only on JioSaavn.com
His eldest son, former President George W. Bush, this year published a best-selling book about his father, titled "41 - A Portrait of My Father."

"US Has No Closer, More Reliable Ally Than Australia," Says Joe Biden