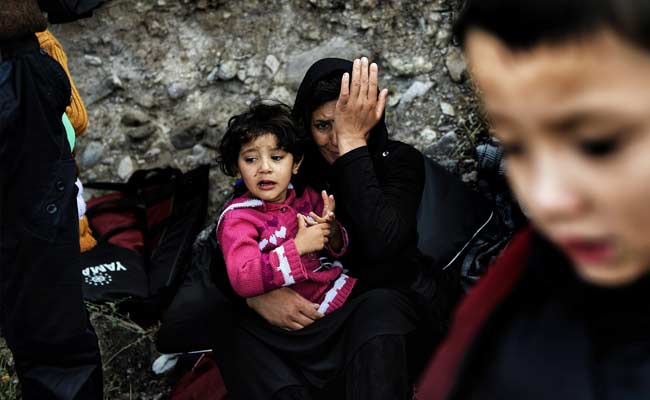 A woman holding a young girl cries after arriving with other refugees and migrants on the Greek island of Lesbos after crossing the Aegean sea from Turkey. (AFP File Photo)

Brussels: The European Union wants more Turkish cooperation with Greece and other EU neighbours to stem migration flows and in return is ready to offer more funding for Syrian and Iraqi refugees in Turkey under an EU plan published today.

The draft action plan was presented to President Tayyip Erdogan by European Commission President Jean-Claude Juncker on Monday, during a visit to Brussels by the Turkish leader. Officials on both sides said the document would form the basis of further negotiations to address the migrant crisis.

The plan lists actions to be taken by the EU and Turkey on two broad themes -- supporting refugees and their Turkish hosts and, secondly, preventing irregular migration.

The EU would, the draft said, provide up to 1 billion euros ($1.1 billion) for this year and next to help Turkey cope with some 2.2 million Syrian and Iraqi refugees as well as further funding. Some refugees would have a chance to resettle from Turkey to Europe.

Among actions the EU draft recommended for Turkey were stepping up its coast guard activity and cooperation with the Greek navy as well as tighten its land borders with Greece and Bulgaria and take back irregular migrants who crossed into the EU but were then found not to qualify for asylum.

It contains no mention of Erdogan's call in Brussels for Europeans to back Ankara's plan to set up "safe areas" and no-fly zones in northern Syria, on which EU officials and member state governments are deeply sceptical.

But it does in its preamble state that the plan is part of a broader relationship with Turkey, that includes its longstanding application to join the EU and negotiations on giving Turks easier visa terms for travel to the European Union.
© Thomson Reuters 2015
Comments
European UnionTurkeyEURefugeesMigrantsGreeceSyria