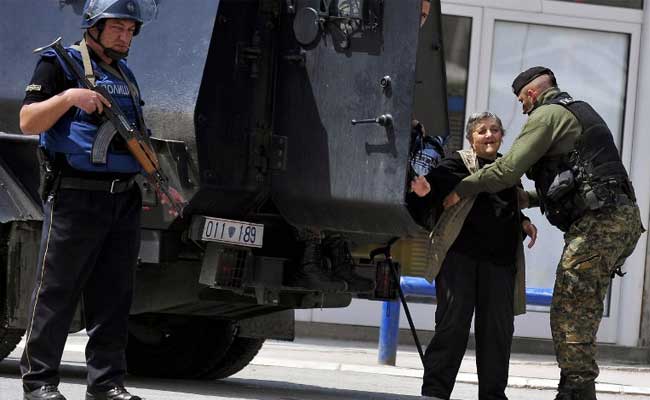 A police officer helps an elderly woman as she is evacuated from the northern Macedonian town of Kumanovo on May 10, 2015, during clashes with unidentified gunmen. (AFP)

Brussels: The EU said it was "deeply concerned" over events unfolding in crisis-hit Macedonia following deadly clashes that killed six police officers and an unknown number of unidentified gunmen.

"Any further escalation must be avoided, not the least in the interest of the overall stability in the country," EU enlargement commissioner Johannes Hahn said in a statement late Saturday responding to the eruption of violence.

Macedonia was rocked in 2001 by ethnic Albanian rebels who staged an insurgency in the Balkan country.

The rebellion, which came in the wake of numerous savage wars between nations of former Yugoslavia, has left European officials particularly wary of ethnic-driven violence exploding on the continent again.

"I am deeply concerned at the unfolding situation in the Kumanovo region and possible injuries and loss of life.

"I urge the authorities and all political and community leaders to cooperate, to restore calm and fully investigate the events in an objective and transparent manner within the law," the statement added.

Violence broke out when police moved in to dismantle what they called a "terrorist group" that allegedly entered Macedonia illegally from a neighbouring country.

The incident comes less then three weeks after around 40 ethnic Albanians from neighbouring Kosovo briefly seized control of a police station on Macedonia's northern border, demanding the creation of an Albanian state in the country.

Macedonia obtained EU candidate status in 2005, but is yet to begin accession talks, partly due to opposition from Greece. Athens denies its neighbour the right to use the name of Macedonia, arguing it implies a claim on the northern Greek region of the same name.

Promoted
Listen to the latest songs, only on JioSaavn.com
Ethnic Albanians make up around one quarter of Macedonia's 2.1 million people.

Brussels also has expressed increasing alarm at heightening political tensions in the Macedonia, where the government and the centre-left opposition have traded accusations including claims of wiretapping and million-euro bribes.
Comments
European UnionMacedonia ClashesMacedonia gunfireAlbanian rebelsKumanovo region