Engineering Climate: From Pariah To Saviour? 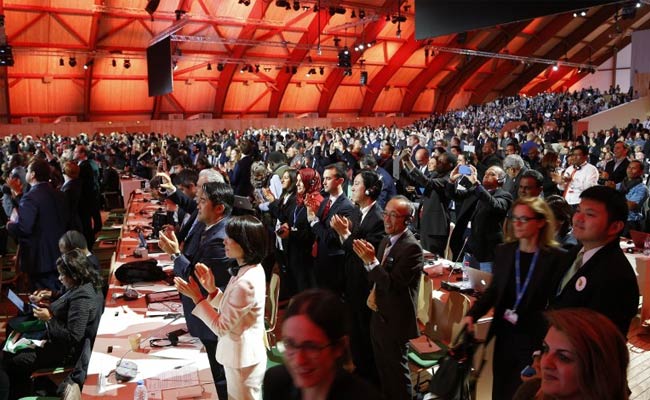 Audience members and delgates cheers after the adoption of a historic global warming pact at the COP21 Climate Conference in Le Bourget, north of Paris, on December 12, 2015. (AFP)

Le Bourget, France: Once dismissed as dangerous science fiction, schemes to stave off global warming by re-engineering Earth's climate may well gain in traction as a result of the Paris agreement.

The landmark climate deal reached in Paris on Saturday poses a dilemma.

So, if temperatures rise and countries fail to switch to cleaner energy in time, the allure of high-tech fixes will, for many, become unavoidable.

But all proposed "geo-engineering" methods carry serious risks and limitations, with many doubts about cost, feasibility and governance, say climate experts.

The direct solution to global warming has long been to curb heat-trapping greenhouse gases by energy efficiency or a shift to cleaner renewables.

Despite the rapid rise of solar and wind, though, the change has not happened quickly enough.

So the pathway to keeping global warming "well below two degrees Celsius" (3.6 degrees Fahrenheit) compared to pre-Industrial Revolution levels -- the goal embraced at the 195-nation talks -- has narrowed over time.

Today, even the most aggressive scenarios for cutting back on fossil fuels laid out by the UN's 3,000-strong corps of science advisors, the Intergovernmental Panel on Climate Change, rely heavily on removing carbon dioxide (CO2) from the atmosphere.

"Nearly all of the emissions scenarios" -- more than 100 out of 116 -- "assessed by the IPCC that keep global averages below 2C assume the large-scale removal of CO2 from the atmosphere by the end of the century," said Chris Jones, a scientist at Britain's Met Hadley Centre and co-author of a new peer-reviewed study on geo-engineering's side-effects.

Sucking CO2 from the air

The first, solar radiation management, blocks some of the Sun's heat-generating rays.

One scheme worthy of a Star Trek prequel that so far remains on the drawing board would place giant mirrors in space to deflect one or two percent of solar radiation.

A less challenging way to get the same result imitates the cooling impact of a major volcanic eruption such as the Philippines' Mount Pinatubo in 1991, which lowered Earth's temperature for a year or two after spewing billions of tonnes of sulphate particles into the stratosphere.

Other mooted schemes including brightening and multiplying the number of reflective ocean clouds.

But even if these plans worked, they would not draw down the volume of atmospheric CO2, which is absorbed by the oceans -- and turning them worryingly more acidic.

Some might also bring unintended consequences. A scheme to sow the sea with iron dust, to spur the growth of CO2-gobbling microscopic plants called phytoplankton, was fingered in a 2008 Royal Society study as a feared source of oxygen loss, endangering other species in the ocean food chain.

So far the real money has gone into the second type of geoengineering: sucking carbon dioxide out of the air.

Planting forests -- "carbon sinks" in climate jargon -- is of course a well-known option for this.

Forestation is a familiar technology and safe, but growing trees takes decades to take full effect when time is short, and would eventually compete with agriculture for land.

A new pilot plant funded by tech billionaire Bill Gates and Canadian oil sands financier Murray Edwards and set up by Canadian firm Carbon Engineering in Squamish, British Columbia, transforms about one tonne of CO2 per day into sand-line pellets.

The long-term objective is to combine this carbon with hydrogen, a by-product of renewable energy generation, to make clean fuels for vehicles.

But the problem is one of cost and timing: reining in the threat of global warming will require avoiding billions of tonnes of CO2 emissions in the coming decades. Scaling up direct air capture is likely to take far longer.

The so-called "negative emissions" technology that figures most prominently in projections for curbing global warming siphons off CO2 from the production of plant-based fuels, turns it into a liquid, and stores it in the ground.

In some scenarios, this technique -- called BECCS, or bioenergy with carbon capture and storage -- is supposed to absorb up to a trillion tonnes of CO2 by century's end, roughly the amount scientists say can be emitted without pushing the climate past the 2C cap.

"We simply don't know if deployment of negative emission technologies on that scale is feasible," said Jones.

His study, published in Nature Climate Change, concludes that the resources needed could pose huge problems.

"There is no negative emissions technology currently available that could be implemented to meet the 2C target without significant impact on either land, energy, water, nutrient or... cost," the study says.

The big worry, say many climate activists, is that such schemes -- once undertaken -- will undermine efforts to cut carbon emissions that cause the problem.

"Geo-engineering technologies such as BECCS will only delay the real and absolute emissions reductions that are desperately needed right now," said Oliver Munnion, co-director of Biofuelwatch.

US Pipeline Hackers Say Their Aim Is Cash, Not Chaos