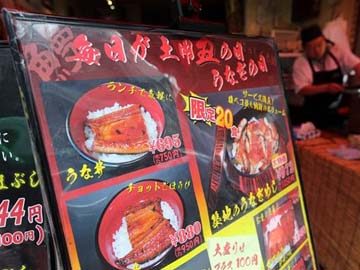 A menu of eel dish is displayed at an eel specialised restaurant in Tokyo, Friday, June 13, 2014.

Tokyo: The Japanese eel, a popular summertime delicacy that has become prohibitively expensive due to overfishing, has been put on the international conservation "red list" in a move that may speed up Japan's push for industrial farming of the species.

Japan's agriculture minister urged that efforts to boost the eel population be stepped up after the International Union for Conservation of Nature this week designated the Japanese eel as "endangered," or facing a very high risk of extinction.

Other species of eel are also facing various levels of threat due to habitat damage and overfishing.

The decision by the IUCN to put the Japanese eel on its red list could lead to global restrictions. Inclusion on the list can be the basis for trade restrictions under an international treaty on trade in endangered animals and plants.

"We must speed up efforts to build large-scale production systems," Yoshimasa Hayashi, the minister of Agriculture, Forestry and Fisheries, told reporters after the IUCN's decision was announced.

Efforts to farm eels have made slow progress due to their complicated migratory patterns. Unlike salmon, which migrate inland to spawn but spend their lives at sea, eels are spawned in remote areas of the ocean and then migrate inland, only returning to the sea to reproduce.

The IUCN said various factors are believed to be hurting the species, including barriers along waterways, pollution and changes in ocean conditions.

Japan consumes more than two-thirds of all eel eaten, thanks partly to a tradition of eating roasted eel as tonic for the heat during the hottest days of summer. The delicacy is as much a custom of the season as watching fireworks, listening to wind chimes and eating watermelon.

Japanese eel are usually raised to adulthood after being caught as elvers, or glass eels. Although there are limits on catching elvers and juvenile eels, demand has soared, putting heavy pressure on the species, as well as many other fish stocks and pushing prices for elvers as high as $36,000 a kilogram.

In turn, prices for mature eels have soared, turning the traditional "kabayaki" roasted eel dish, with a tangy sauce on top, into a luxury rather than common household dining. A bowl of rice with a slice of roasted eel on top sells for $7-$10 at Tokyo's Tsukiji market. Small packages of roasted eel sold in supermarkets sell for $15 or more.

The threat to eels has received much less attention than the crisis with some other species, such as Bluefin tuna.

Such issues will be among those discussed next week at a US-led "Our Ocean" conference in Washington, DC, said David Balton, a deputy assistant US secretary of state.

"A third of all major fish stocks are overfished and another 50 percent are fished at their limit and are in danger of being overfished," Balton said on a conference call. "The situation for fisheries around the world is not a good one. We need to act to end overfishing."

Elvers are caught in rivers in Asia and other regions and provided as seed stock for aquaculture. They are a lucrative fishery for New England, in the US, where quotas have been set to prevent overfishing.

Japan put the Japanese eel on its own red list of species in danger of extinction last year. The IUCN said the population of all eels has declined by as much as 90 percent over the past 30 years.